Useful way for me to keep track too!

First pic was in my introduction thread too but it's a good baseline: 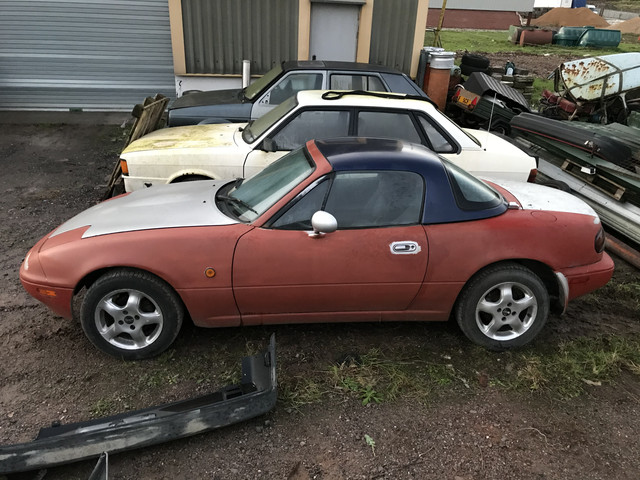 Brief history (will try not to repeat myself too much from the other thread):

I got the car in the summer of 2020 from a family friend. It had been sitting for about 3 years, I'm told. It went off the road originally due to damaged paintwork (user error), but was never sorted, so it got a (very) liberal coating of red oxide. In that time it had a new soft top and that was about it.

Started off the jump pack and we brought it back to the local body shop, where I spend some of my time "volunteering". It was basically entirely red, other than a silver spoiler. I do have a pic of it in factory silver, which I'll dig out soon.

What it came with:

AC (dead), Power Steering, Momo steering wheel, leccy windows - I think that could make it a "special package" (lovely phrase to boast about - "'ere mucker, guess what I've got?") but that sounds like it would make it a '90? I'm not really hung up on stuff like that but it's nice to know I guess. We think it's a VLSD too, not 100% sure yet.

What I've done so far:

Coolant reroute (will take a picture under the hood next time I'm there as I'm quite pleased with the route).

Other stuff to do:

I'm at a bit of a weird point of trying to decide what I want it to be. I have vague intentions of just keeping it a fast road car, and future SC aspirations, but realistically, will I ever have the money to do that? We shall see. I'm kind of open to just fiddling and changing bits here and there. I've already spent a fair bit on parts and the wallet is starting get wheezy so need to calm down

Theres definitely some rust that needs seeing to (post coming soon) and mostly I just want to drive the bloody thing! 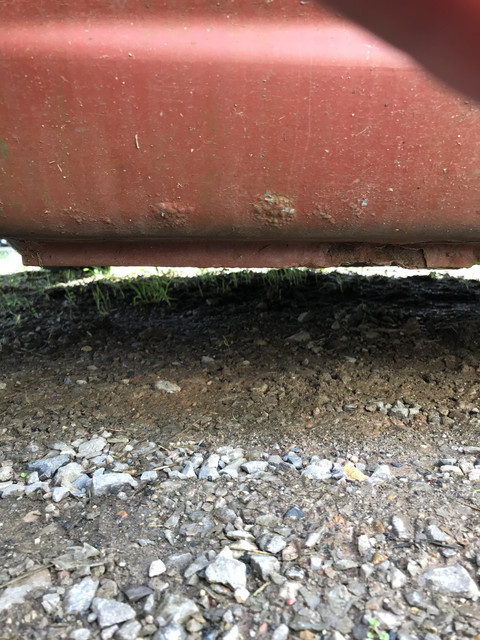 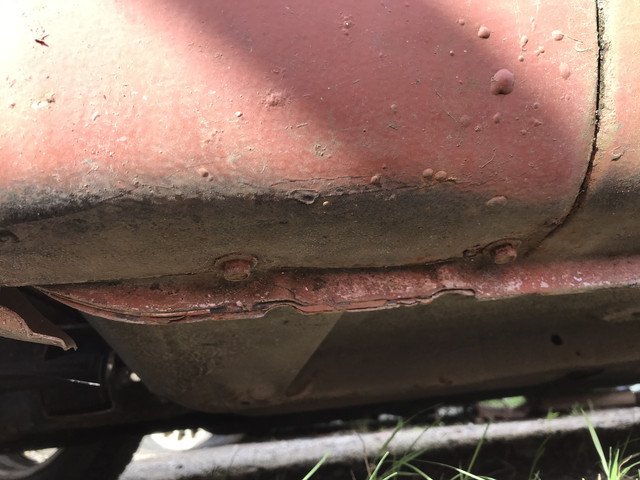 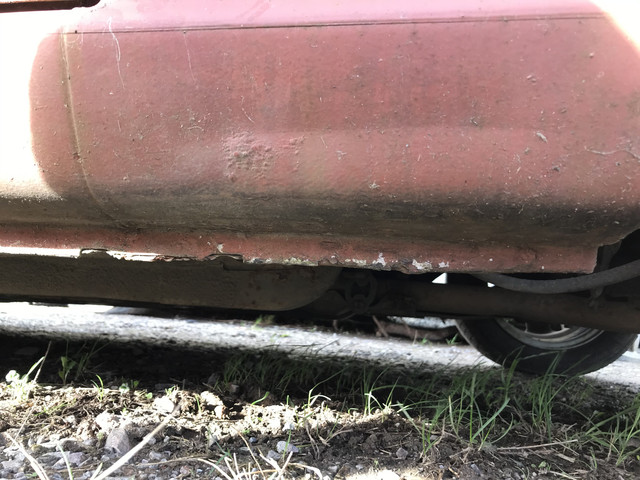 I'm not too concerned, but we'll see once she's stripped ready for the spray.

Doesn't help being stored outside but my options are limited.

Front wings can easily be swapped out and the rust under then rarely ever has gone through, just give it a clean back and paint.

Shadowraven said:
I'd get the rear sorted ASAP as it'll likely be worse than you think.
Click to expand...

I'd love nothing more than to start like, now, but I don't pay anything for being at the shop so I get my turn when there's nothing else going on (read: not often).

Alternatively, I'll get it done outside when the weather's better. It WILL be done before autumn hits, come hell or high water (the latter being very likely...)

Joined Feb 16, 2021
·
17 Posts
Had a day down the shop yesterday. Small jobs. Had detangoed the front lights so they're back on and looking much nicer (without bulbs yet)

No pic of them on the car but one just after the job - (a nice sunday morning activity that was! Moccasin cameo.) 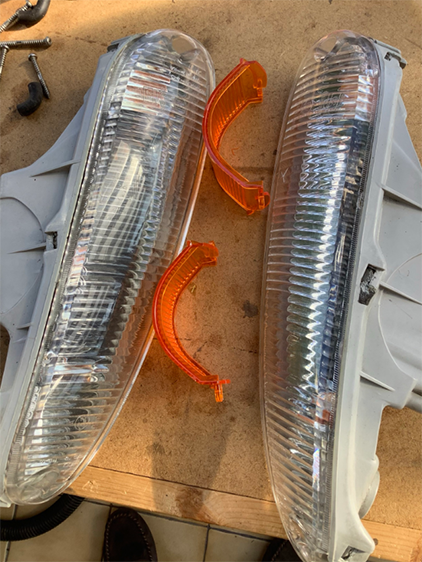 Also had a poke around the sill drains and all were clear, which was nice, bar one at the offisde rear which has been smushed with a jack at some point. Desperate to start stripping panels and paint to get at it, but have to be patient

Water coming in the boot has been an issue since I got the car and it's still getting in. Luckily it's just as red as everything else so it's not doing much (visible) damage. Will likely replace every seal I can find at a later date. Rear light seals are currently doubled (but both sets some degree of perished). Pretty confident it's not coming in from those though.

Also had some fun with the only key I had - snapped in two, hurrah. Chap at the key-cutting place had a right faff trying to secure it enough to copy it over. The new one works (after some extra fettling) but barely. May just buy a blank and file it myself. 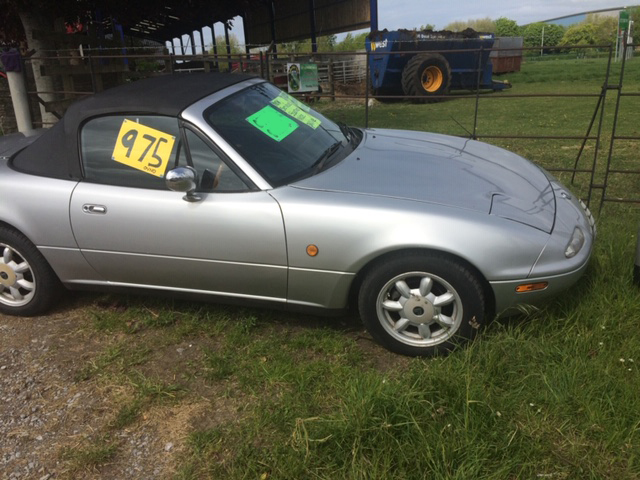 This was sent to me by the previous owner. What a gleamer. Just over 6 years ago - such a shame, but then if it hadn't been so borked, I'd have never ended up with it.

Have seen a lot of suggestions for ACF-50 once I get to rust-proofing; the shop guys bleed waxoyl but I'm not sold. Have done some research but any wisdom would be appreciated.

MXVera said:
Have seen a lot of suggestions for ACF-50 once I get to rust-proofing; the shop guys bleed waxoyl but I'm not sold. Have done some research but any wisdom would be appreciated.
Click to expand...

remember that ACF50 is used in aerospace & military circles* are any others?

Joined Jun 3, 2013
·
5,237 Posts
waxoyl breaks down and gets embedded with dirt which eventually attracts moisture, I'd not recommend it for any external surface. You're better off taking the rust off and applying a hard wearing coating like truck bed liner or POR15, it's also easier to clean to inspect in future and wont turn every job under the car into a messy nightmare. For cavities it should be fine but some consider it a bit thick to get into the seams and use Dyna S50 or equivalent.

This was my POR15 3 years after application after a wipe with a damp sponge.

MXVera said:
Have seen a lot of suggestions for ACF-50 once I get to rust-proofing; the shop guys bleed waxoyl but I'm not sold. Have done some research but any wisdom would be appreciated.
Click to expand...

remember that ACF50 is used in aerospace & military circles* are any others?

I mean, I quite like the colour of the can too, and I guess that's as good a reason as any!


Shadowraven said:
waxoyl breaks down and gets embedded with dirt which eventually attracts moisture, I'd not recommend it for any external surface. You're better off taking the rust off and applying a hard wearing coating like truck bed liner or POR15, it's also easier to clean to inspect in future and wont turn every job under the car into a messy nightmare. For cavities it should be fine but some consider it a bit thick to get into the seams and use Dyna S50 or equivalent.

This was my POR15 3 years after application after a wipe with a damp sponge.
Click to expand...

Yeah this is what I'd read too. Dyna S50 is new to me, but just from the marketing w**k I like that it's "extremely long lasting" (swoon). Main ACF 50 complaint was reapplying seasonally. POR15 for the underbelly - I mean, that's a great advert right there. Nice one

All food for thought, cheers chaps.

Edit: Will update once I get to start the excavation!

Between starting "real" work again and various other time commitments I've not had as much time as I'd like to work on Vera, but I've got a bit done in the last few months in terms of the respray.

Bonnet (starting with the easy bits!) 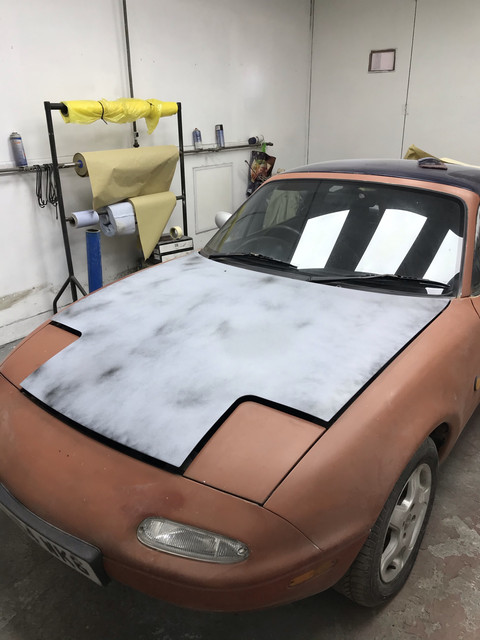 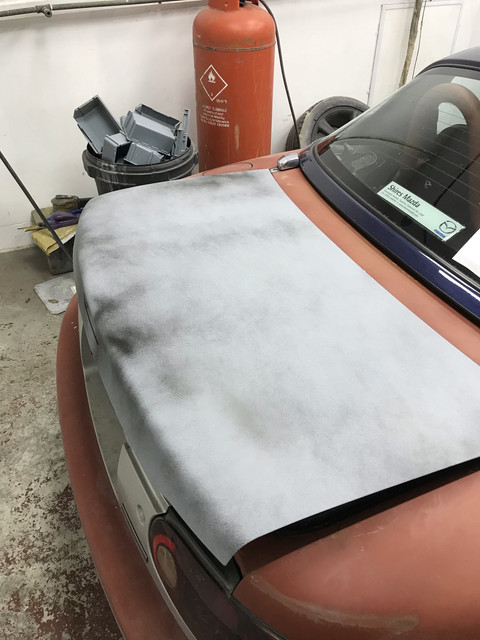 Quarter panel (apologies if the decor offends, the place is old school!) 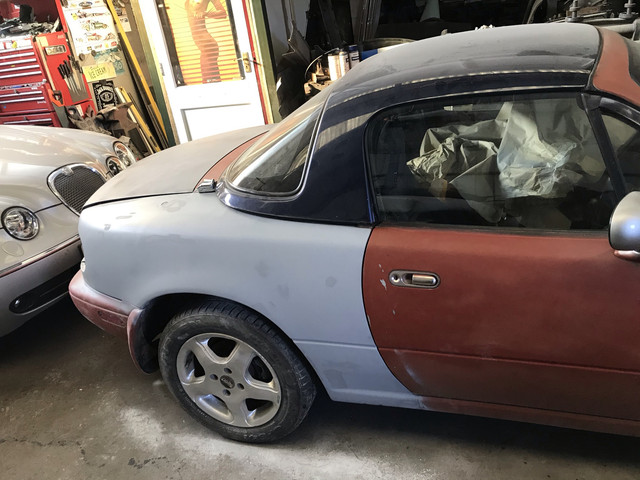 That was the worst of the visible rust. Here's the close-up, Mr. DeMille: 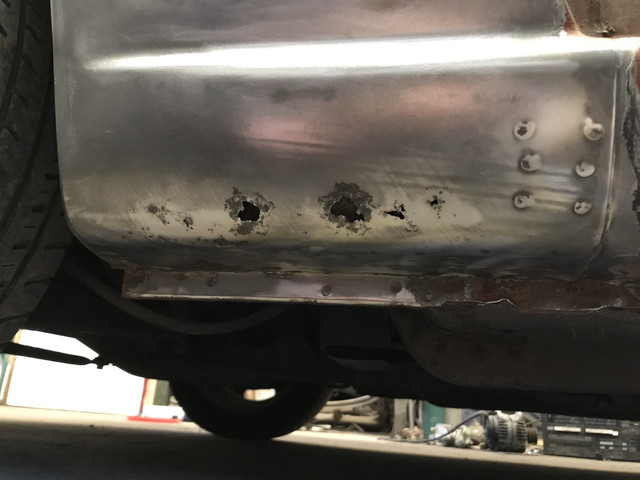 So there will be some cutting to do and we'll see what lurks beneath. At the risk of sounding overtly cocky: it doesn't look toooooooo bad...

Generally speaking it's been a good process. None of the panels so far have been super wobbly. The boot was by far the worst, suffering from a few highs and lows, and some obvious wobbles from someone either standing on the thing or giving it a hefty slam. Plus a really thin section that made skimming and sanding quite slow because it kept flexing. All good practice! (I've never done this before)

The quarter panel had some dents from the inside, probably from a wayward battery (it's currently strapped down with a bungee).

And finally, here's a fun one that highlights when I said: they oxide-d everything, I really meant everything: 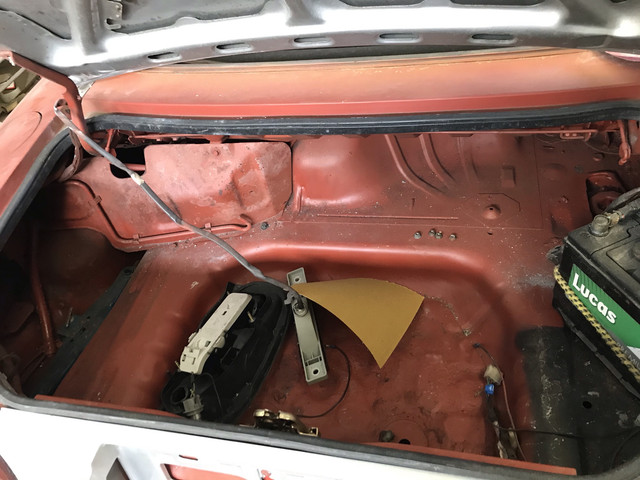 I wish I'd left the old battery in there. That was red too!

At least they took the jack out...

Offside door filled and etched (nasty dent on the swage line, still not perfect but should be fine with enough build primer!) 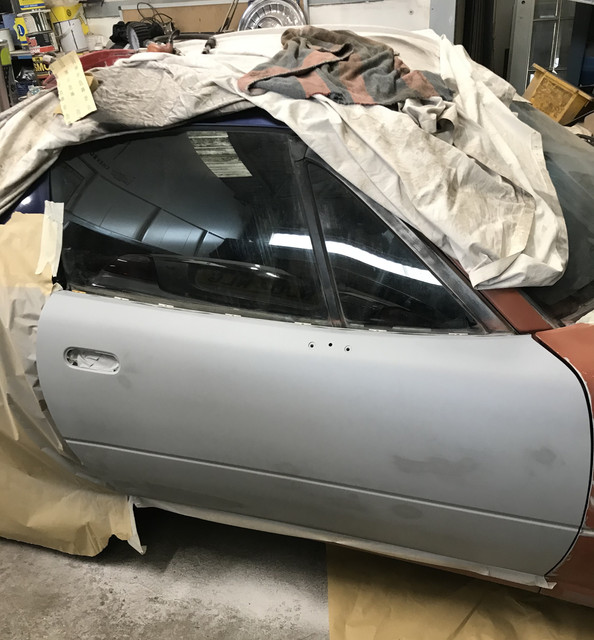 Offside wing stripped and ready for some dent tickling. Looks a bit like someone smashed their teeth into it. Or a sock full of gravel maybe? Woodpecker??
There was a lot of filler covering that little mess. I'll give it a proper seeing to rather than filling over it. 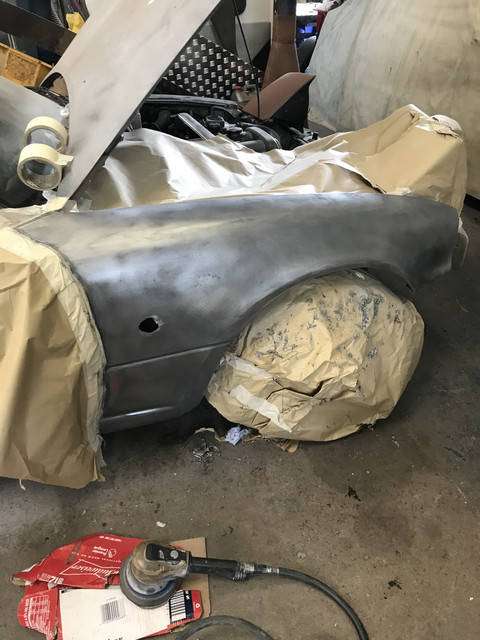 Also took the front bumper off in readiness for rubbing down. Now that was a trial. 6 sheared bolts, couple of broken clips. All good fun!

Progress is slow, I don't get as much time at it as I'd like, but the plan is to keep going as it is, stripping and priming on the car for now, then when I have more space and time I'll take bits off and tart up the edges. We'll get there. Slowly but surely!

iiNNeX said:
Good progress bud, you looking to do an OEM resto or restomod?
Click to expand...

Cheers. I know it won't be OEM spec, but beyond that I really don't know exactly what it will become yet.
I've chosen a non-factory colour but that's about the only real future decision I've made so far.

Progress has been slow, to say the least. That's mostly down to not being able to commit the time I'd like. In any case, here are some recent pics:

This is pretty much how she's looking at the moment. 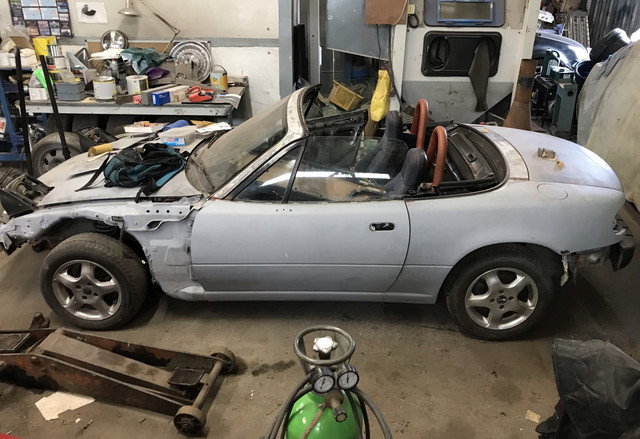 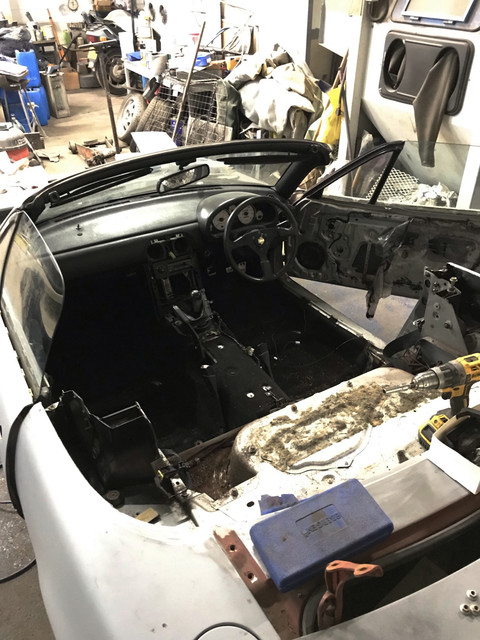 The rear bumper had an aftermarket fog in it, and an ugly cut hole to make it work. This was the patch that came out of a civic bumper. Keeping it regional at least! This has since been sanded and filled and is lovely and smooth once more. 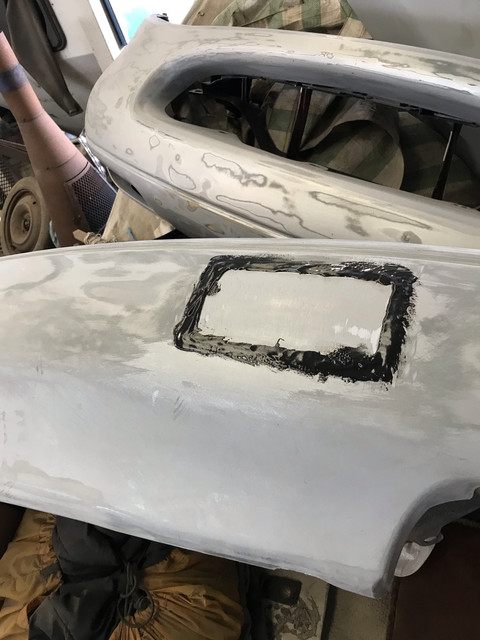 The rear nearside arch was not so great. There's also significant sunshine through to the boot. We're working on this part currently - the rot has all been cut out so it's just a case of making up pieces. There are some tricky shapes in these sections! 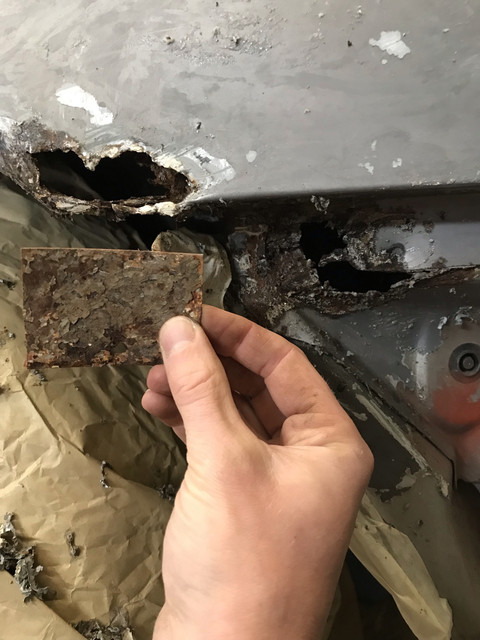 I have loads of photos of progress between the previous photos and these but that seems a little redundant now.
I can't see myself keeping up with this thread with any greater degree of haste or frequency than I am currently, so at this rate the next oploads might even be the completed vehicle 😂
1 - 13 of 13 Posts
Join the discussion
Continue with Facebook
Continue with Google
or sign up with email
About this Discussion
12 Replies
4 Participants
Last post:
MXVera 4 mo ago
Mazda MX-5 Miata
A forum community dedicated to Mazda MX-5 Miata owners and enthusiasts. Come join the discussion about performance, modifications, classifieds, troubleshooting, maintenance, and more!
Full Forum Listing
Explore Our Forums
MX-5 / Roadster Forum General Chat & Banter Members Rides Forced Induction & N/A Power Mods General Car Chat
Recommended Communities