Plugged it into my phone and into the me221, quick bit of setup, and it worked pretty much straight away!

The standard gauge was pretty full, with a load of stuff that I didn't need!

So quickly knocked together my own gauges which have worked perfectly!

Just shows boost on the left, and then Intake and coolant temps, boost as a text number, and afr just to fill the gap!

Could check boost which is still nice and solid at 5-6 psi,

Going to wait until its mapped and aligned before getting them fitted!

And brought the spoiler out for a test fit! Looks so good!!

Really pleased with how it looks!

Hardtop and spoiler are now in the garage ready for tiger seal tomorrow!

Need to put another bead around the window to seal it, it doesn't leak in the rain but the pressure washer can get a bit of water thorough!

I've also got a bit of a problem with the idle, with the screw all the way in, and the idle valve set to 0 its still idling at just over 1k.

I have checked and its not any of the vaccume hoses, I think its the butterfly on the main throttle body is slightly open and letting too much air though, so need to get that adjusted tomorrow!

Hopefully I used enough tiger seal, bit difficult to tell exactly where it needed to go but in put plenty on!

That should be dry by now so first job this morning will be to remove the tape and clamps!

I also took the car for a good long test drive today and there didn't seem to be any problems.

So I've booked it in for mapping on the 10th, I would have liked earlier but m-tech are fully booked! 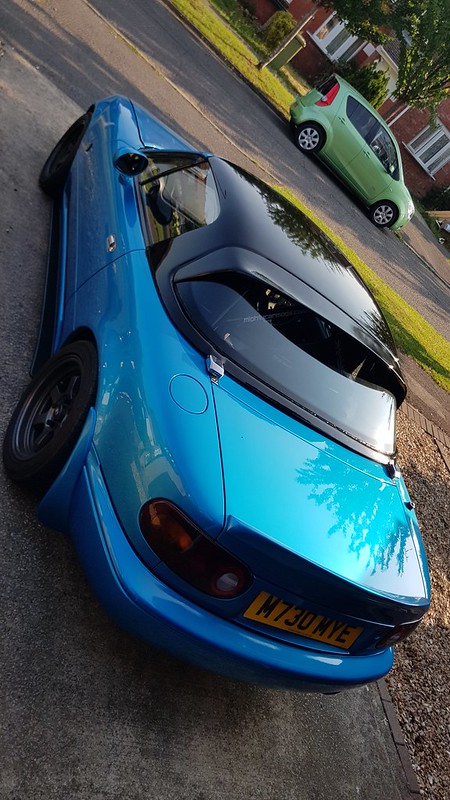 And I really like driving with it on! Don't get baked in the sun, but still plenty of air with the windows down! 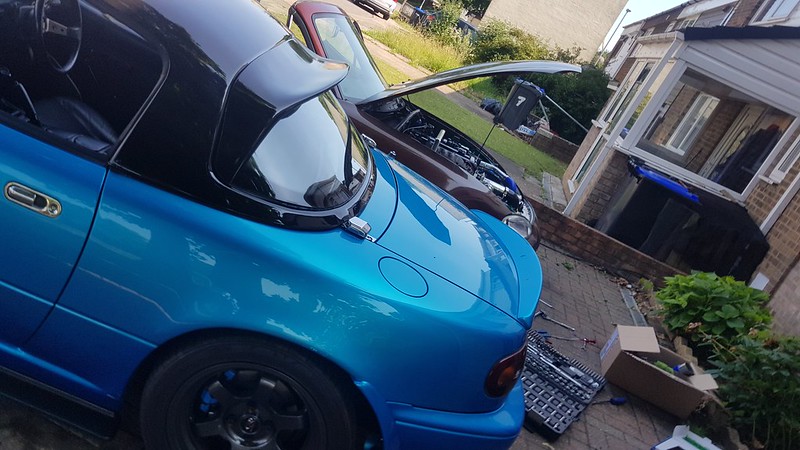 Then took it for a quick 40 mile run to a friend's to help him get his supercharger running! 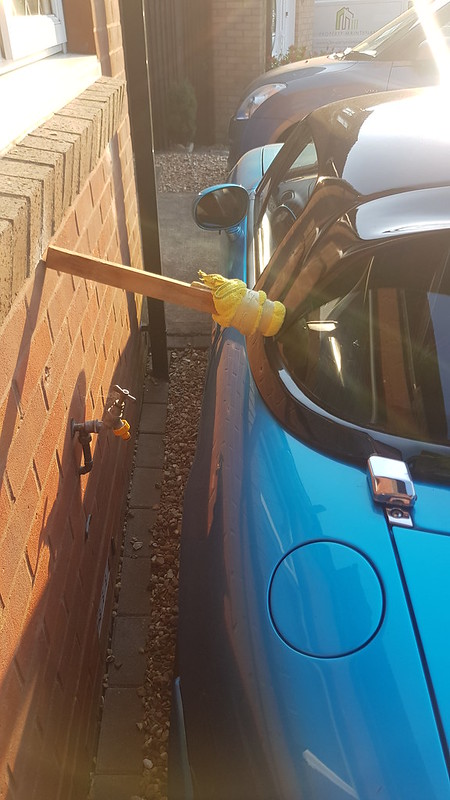 Hopefully that's it now and it is stuck for good!!

Hopefully that's it now and it is stuck for good!!
Click to expand...

You've missed a trick there, could have held the spoiler in place by hand while mastic cured & enjoyed the tap pouring cold water on your feet as an added bonus :lol:

Hopefully that's it now and it is stuck for good!!
Click to expand...

You've missed a trick there, could have held the spoiler in place by hand while mastic cured & enjoyed the tap pouring cold water on your feet as an added bonus :lol:

Oh yes I like what you're saying! But that is in full sun for a few hours during the day, although I would have had nice cool feet the rest of my would have been burnt to a crisp!

The non driven rotor had a bit of play along the length of the charger, probably only 1mm or so, but it was enough that it actually knocked loudly when it hit the end! so that charger has been put in the project pile, hopefully turn the rotors into a lamp or something!!

so anyway, a quick bit of searching and I found a lowish miler supercharger fitted with a GTT 17% reduction pulley, relativly local and for a good price! 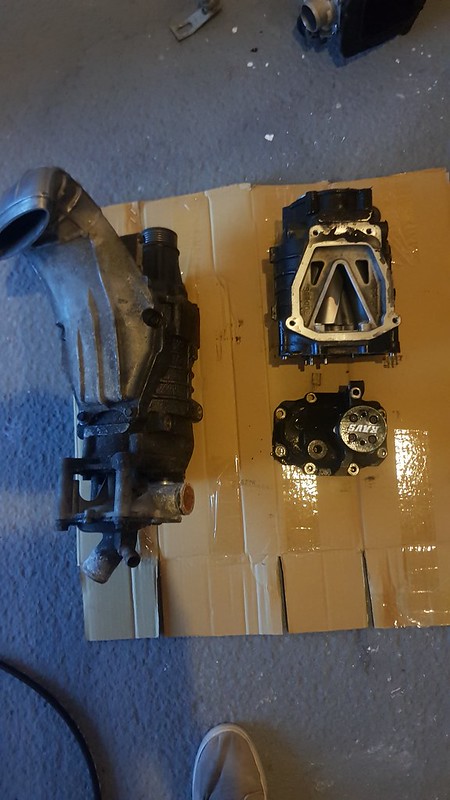 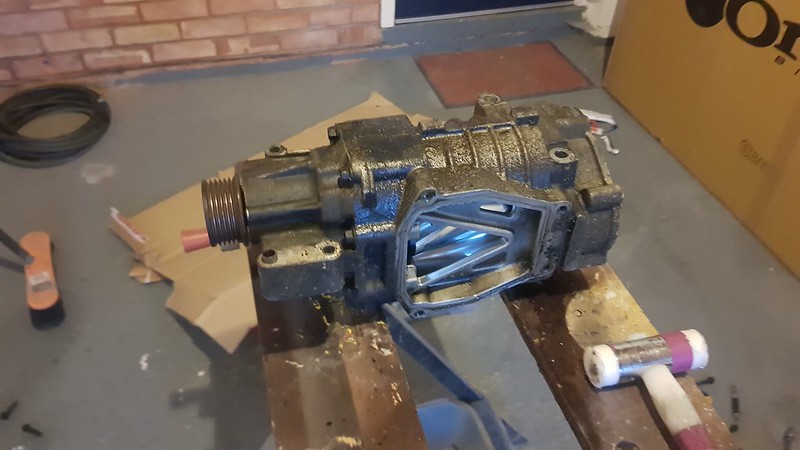 apart from the grime it seemed to be in pretty good nick, no play in the coupler or rotors, and when I removed the water pump and water pump plate, the oil was like new! so hopefully the nose oil is the same, I have ordered fresh oil anyway but should be good enough to get it on the car and ready for mapping next week!

so onto modifying the charger to fit! 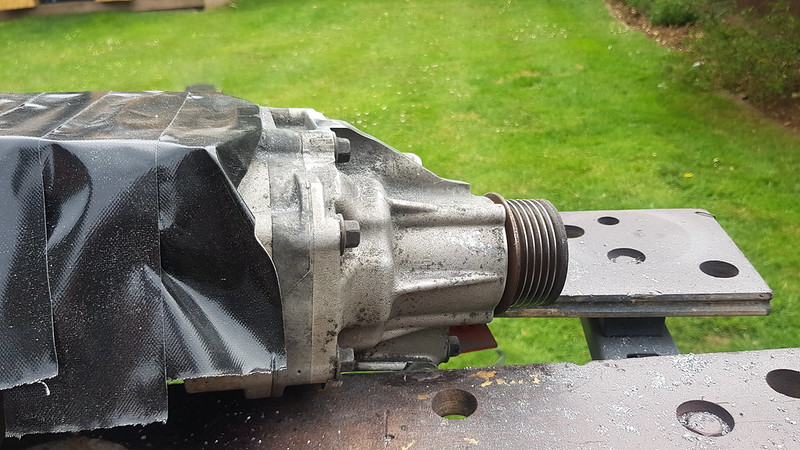 cut that bit off,

and drilled a couple of shallow holes in the inlet to take the grub screws. 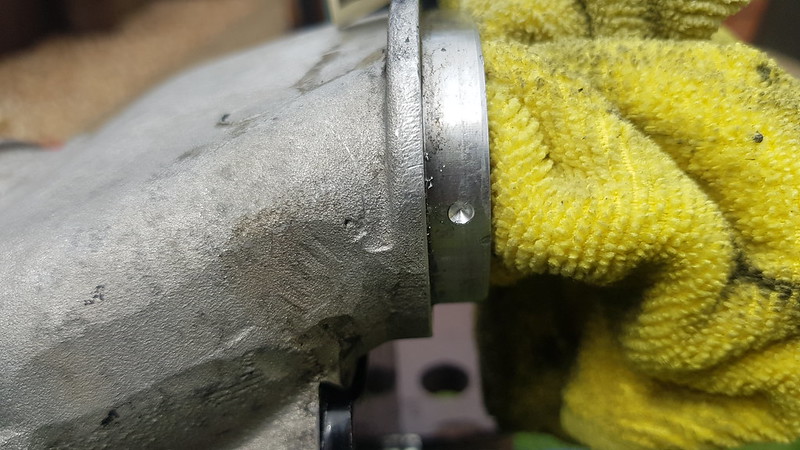 and then RTV on the inlet, outlet and the bolt for blanking the air grommet. 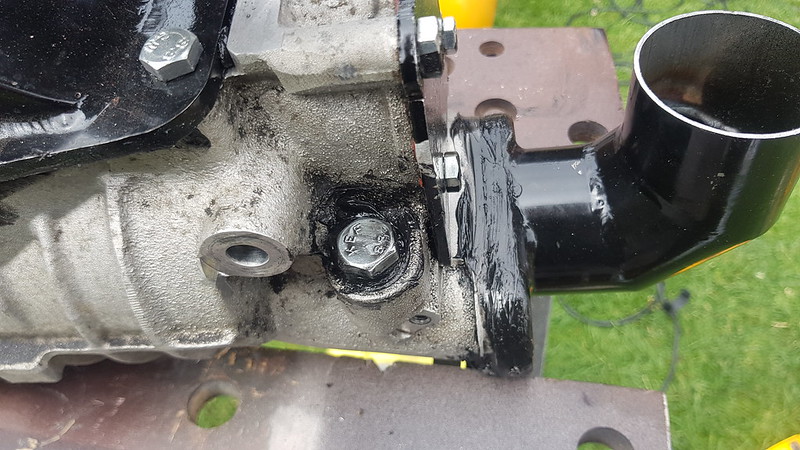 and finally put a bit of paint on the pulley, as that had gone all rusty! 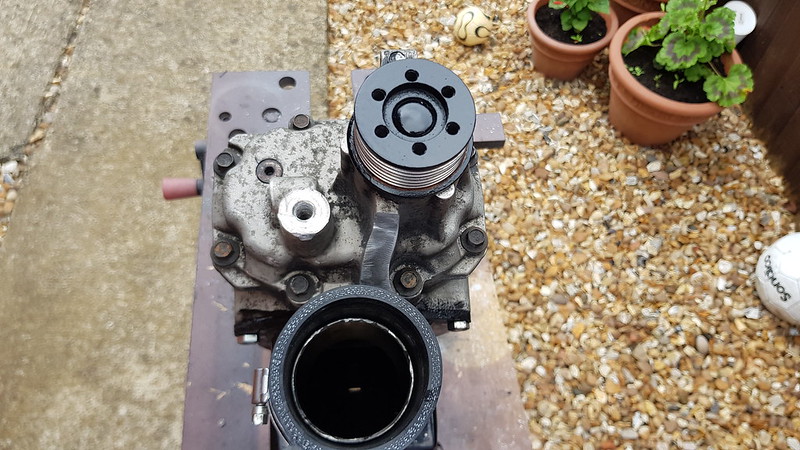 and mounted back up! 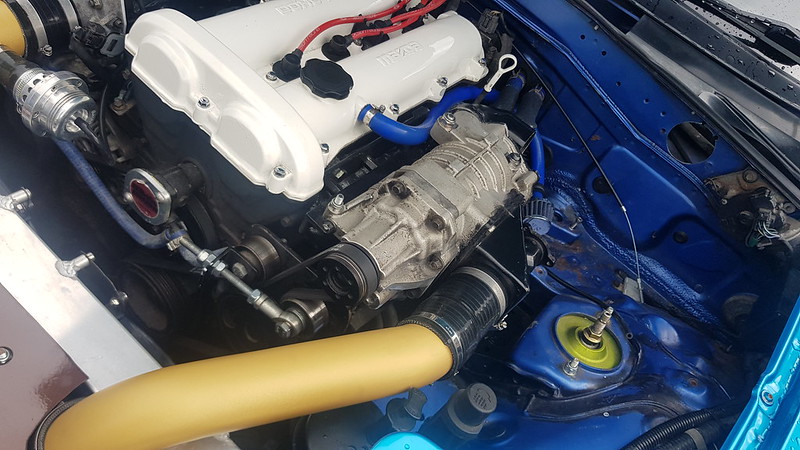 Luckily I run quite a small belt on the 15% reduction anyway so it fitted the 17 no problem, lucky as I has just bought a brand new belt!!

I then thought I would check the bypass valve as someone had mentioned about them needing adjustment! 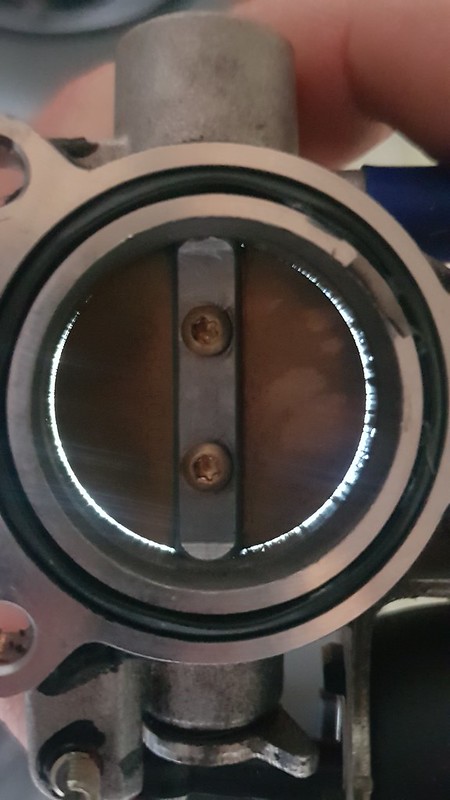 Bit of a bleed!

I've adjusted down using the grub screw and the buterfly and got it pretty close. 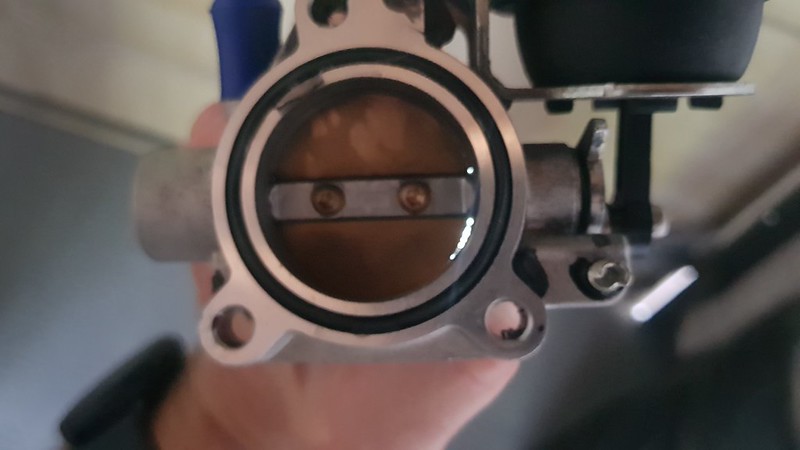 just going to try and layer up a bit of dry PTFE spray to help close up the last little hole, get that back on the car and see if it loses any pressure.

if it does I'll have to get a new one from 1320 mini, hopefully quick before mapping next friday!

Joined Dec 9, 2014
·
631 Posts
It's all rebuilt and back in! New supercharger makes a couple of psi more boost, but more importantly doesn't sound like a bag of nails! 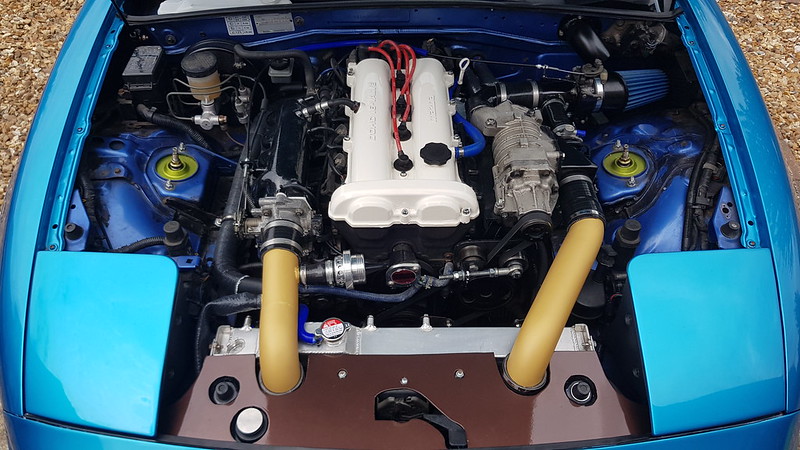 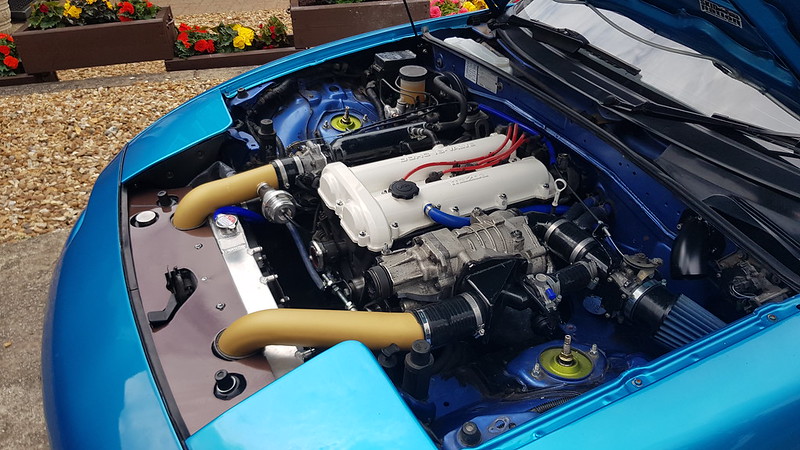 And then went out and grabbed a couple Of photos now the hardtop and spoiler are all finished and looking good! 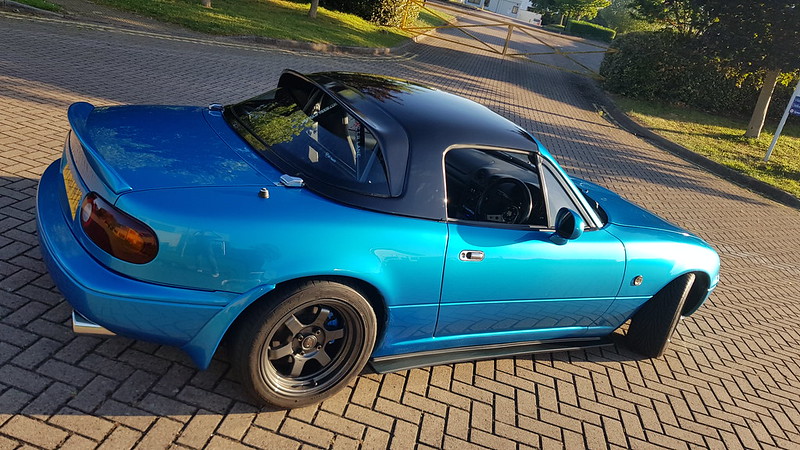 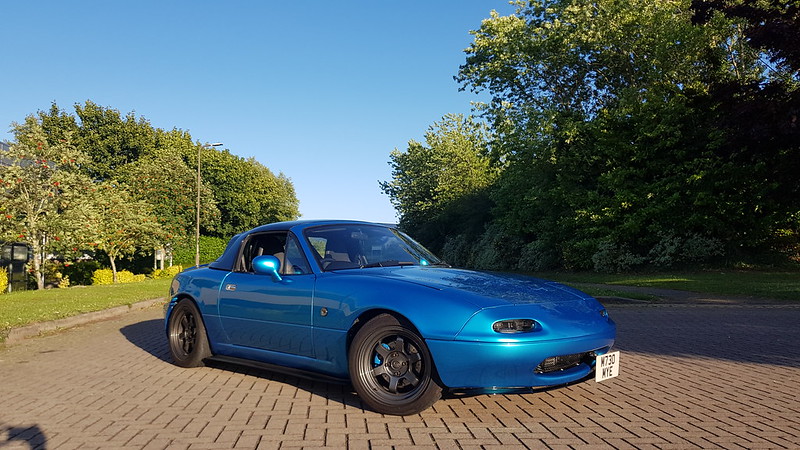 It's booked in for tuning on Friday, so hopefully that all goes well and it sees a little more power!

I've been driving it the last couple of days and everything seems good! Desperately needs an alignment but that's waiting until after mapping and once I've got the sticky tyres on!
S

A front lip would have made it even more avesome.

Slampen said:
Your car is looking awesome.
A front lip would have made it even more avesome.
Click to expand...

It has a baby front lip

I don't like gv style lips, don't mind the oem ones as much, but I like this one!

Cut the ends off and it fits a dream!
S

Sarly start at 6am to get down to Mtech for 9! 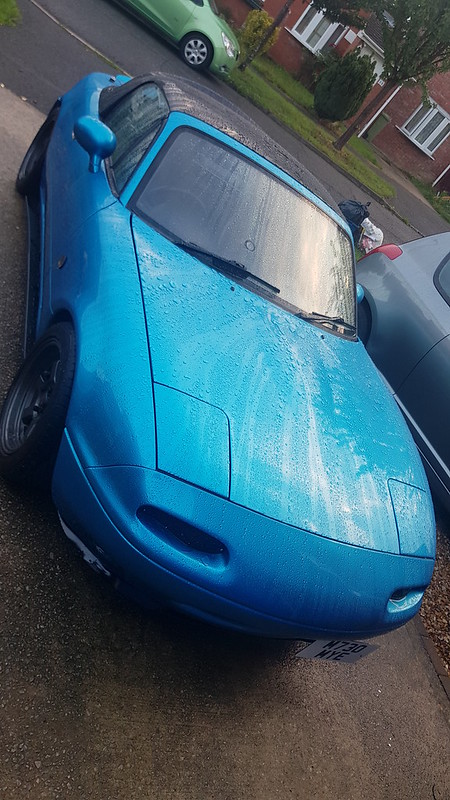 I arrived around half 8 and the car was loaded onto the dyno by one of the guys, and then matt came around to start work! 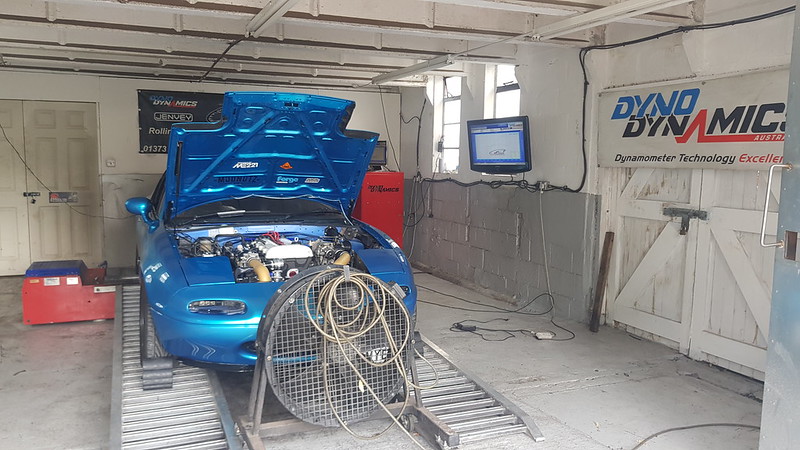 First thing was to set up the idle, matt explained it all to me so it started to make more sense to me how it is set up.

Then putting the car under some load to check for pinking.

I knew what pinking was, but never heard it, apparently the timing was really far out, like 16° advanced from base, which was completely my fault, the timing light I used must have been dodgey, and has now gone in the bin!

But anyway it was pre detonating so bad that you could actually hear it, like someone hitting the block repeatedly with spanners!

So one of the guys from Mtech then checked it, and also found that I had two white marks on the crank pulley too which won't help!

He checked for TDC and then highlighted the correct mark!

After the timing was set up correctly, matt continued loading the car up and now no pinking! Happy days

However at idle there was a rattle, a new one that sounded like it was coming from the supercharger.

I grabbed a screwdriver quickly and started to poke around and listen.

It was almost at the point of deciding whether or not to call it a day or carry on regardless, when I noticed the bottom brace for the supercharger had snapped! And was just rattling around on the back of the power steering pump!

Phew thatvwas a relief, whipped it off quickly and then carried on! 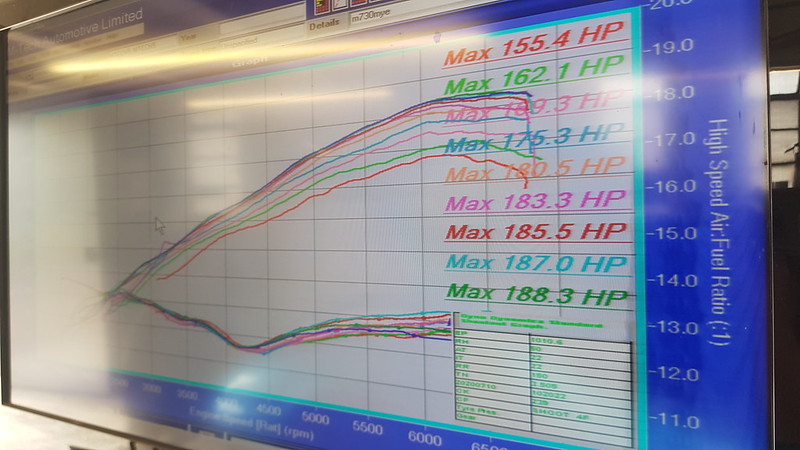 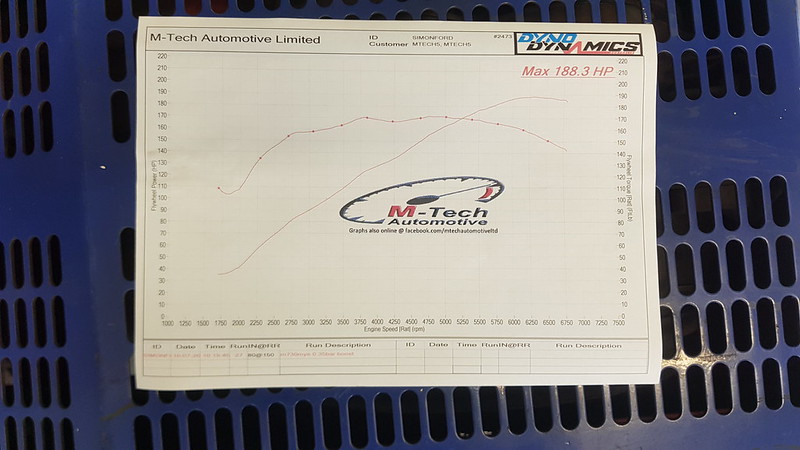 It had made exactly the same power as last time, but more torque.

We were hoping for more as it was running a 17% pulley rather than 15, but the supercharger is probably a bit worn as it was giving quite a inconsistent boost line, but it was consistently inconsistent!

After looking at the two charts, it has actually done exactly what you would expect, it's moved the power slightly down the rev range and the supercharger is still tailing off at the top end, which would would expect as it starts to become in efficient!

Either way it is so much fun again! The power feels great, the torque really puts you in your seat.

So that is the plan now for the next week until I get my semi slicks fitted on Friday!

And then got called into work on Friday so no new tyres fitted!

The car has spent another weekend on the axle stands, but it's all good, one more Weekend won't hurt it!

Hopefully new tyres will be fitted tomorrow, and then in for an alignment!

Anyway, here is a video of my best attempt burnouts!

Joined Dec 9, 2014
·
631 Posts
So it's been just over a month now running the Giti semi slicks and I have some road based feedback on them!

When they are cold they are pretty slippy, as you would expect, but get some heat into them and the grip is pretty outstanding! I've been pushing round roundabouts faster and faster and only just starting to break traction, which it does really progressively and predictably!

Downsides are they are so stiff and noisy for day to day driving!
Every bump is bone shattering now, and the road noise is almost unbearable!

I have been caught out twice in the rain with them and they arnt bad, certainly no worse than the old proxes were!

I was due a track day end of August which was overbooked,
So I'm not heading to Snetterton 21st of this month, and then Donington for a mx5 only day at the end of November.

Due to the potential for bad weather I decided to pick up a second set of wheels, and managed to find a set of BMW e30 alloys fitted with pilot sport 3s for a bit of a steal, so they will be my new daily/wet track wheels and tyre combo! But hopefully it ends up dry as I really want to try the GITIs on track!! 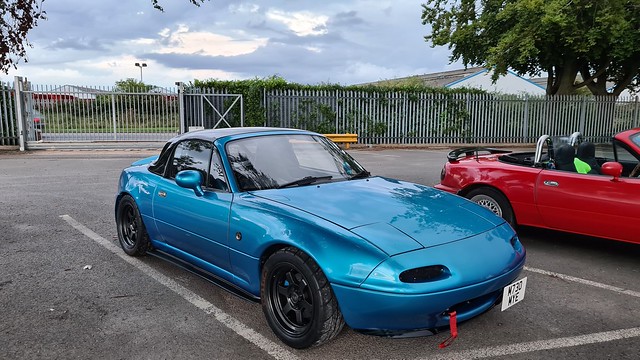 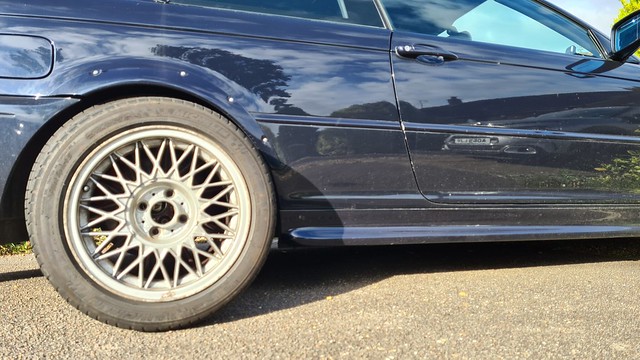 I also made a little cover for the well in the bottom of the boot, getting bored of tools and stuff flying around the boot, so this is now covered with some black carpet and on a gas ram so it lefts up when you unclip it! Quite pleased with it! 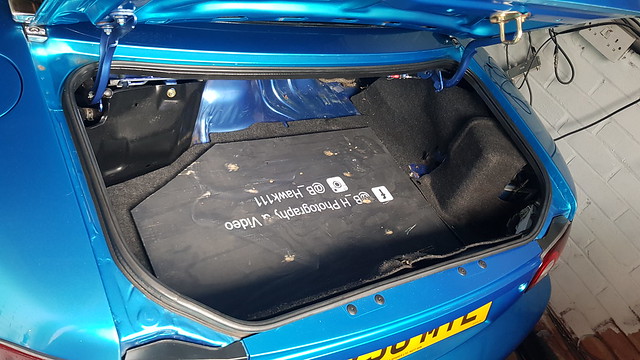 Joined Jun 3, 2013
·
5,056 Posts
Aww I was looking forward to the track footage. I've a day booked at Donnington for the 30th, praying the weather is good as I have nothing but semi slicks. How much is the mx5 day, I could be tempted if it isn't full, would be nice to have a rematch from Silverstone where your extra power just walked you away from me, lol.

Most semi slicks are really f'ing loud. What pressures are you running? I know the nankangs want about 26psi which does help with noise a little.

get some spiggot-rings if fitting these on the 5, bit safer than hanging the wieght of the car on ~30 year old wheelstuds :blink:

they do fit a 5 well, maybe scrape an arch @ times if you're pushing but look ace B)