How To: Diy Daisies Wheel Refurb

No replies to this topic

Around two years ago I decided to venture into restoring some mk1 daisy wheels. I saw a lot of resources and good guides, but mainly within the USA market, so considering two years later the wheels still looked pretty good - I thought I’d write up how I did it for us Brits.

Green Gunk, to remove any grease from my well used wheels

Wet and Dry paper: 800 - 2000 grit. Feel free to go as fine as you want. The golden rule I followed is the finger test - run your finger over the wheel, until you cannot feel any bumps.

I took all four tyres to the tyre shop to remove the knackered ones completely. I applied the gunk as described on the box to both the front and the back of the wheel, and rinsed off. 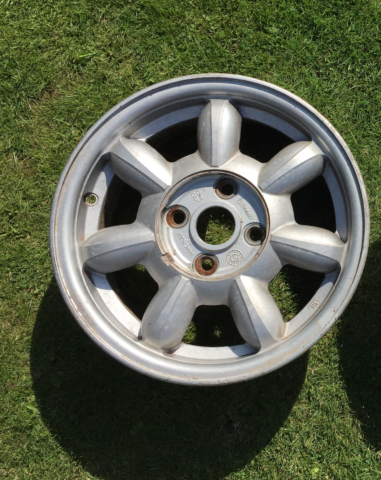 After the gunk treatment

The sanding. This is the hardest, longest part. I used the coarsest wet and dry paper (in wet mode) to reduce the curb rash significantly, and then progressively finer papers for the rest of the wheel. The trickiest part was smoothing out where paint had flaked off, so I had to try gradient these imperfections out. This took a couple of days of sanding. I tried to get it to the point where running my thumb over the blemishes with my eyes closed would feel uniform and smooth. This is really where I wanted to take my time, otherwise any tiny bumps would show up massively when spraying. 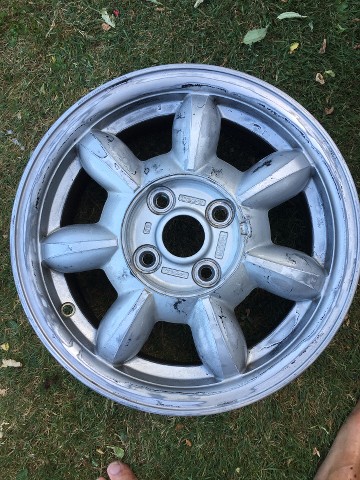 After a lot of wet and dry work. You can see where I have had to 'fade in' to the paint and bare metal.

Rinsed the wheel, and used alcohol wipes to remove any fine dirt or grit from the wheel. Next was the fun part - spraying.

First, the etch primer. It was pleasing to see this sprayed on and look almost perfect. However, on the first pass there were a few little nicks and blemishes that weren’t quite right. So I waited an hour or so for it to dry, and then went over those parts until they were smooth, and sprayed them again. I repeated this process until it was near perfect. 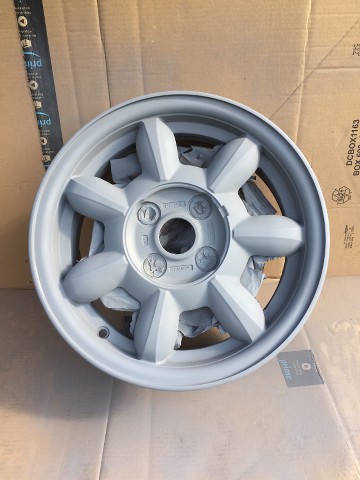 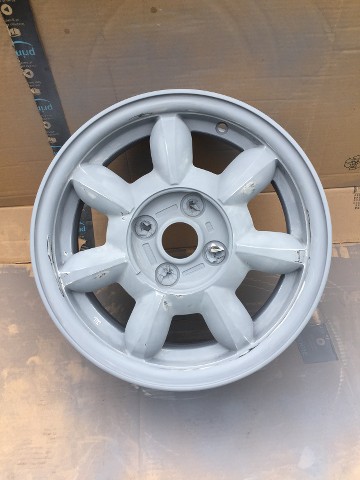 After Identifying imperfections, and sanding again. I would then spray these areas over with etch primer once more until perfect.

Note: I taped up the protrusions where the lug nuts go. In hindsight, I wish I had sprayed these too, as mine were rusty and now really stand out against the fresh paint. Learn from my mistakes!

I did 2-3 coats on each wheel, making sure all the nooks and crannies were nicely covered. It was getting kind of late, so I improvised with some photography lights to spray into the evening. Try and do this on a day that is dry, but not too much wind and not too hot.

The advantage of having the tyres removed was that I could spray properly all around the lip, and it was so much easier to move the wheel around to get everywhere I wanted to, without having to worry about spraying a tyre. 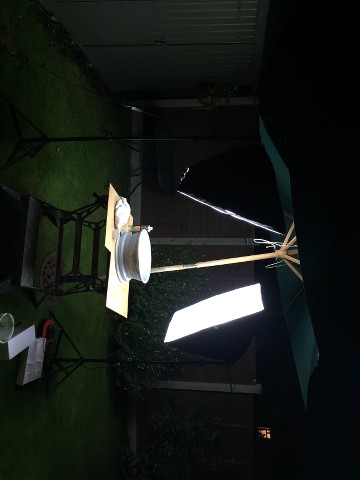 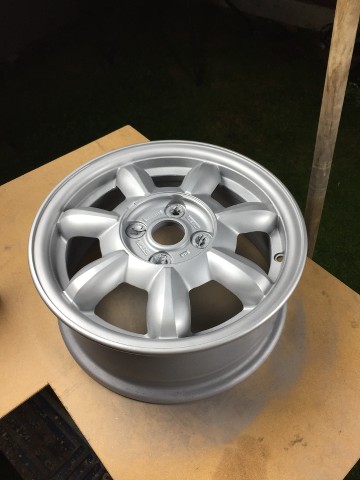 Freshly sprayed wheel, I was very pleased with how it came out. The Autoglym silver is a perfect colour.

This is pretty much the same as step 5 - except of course, I didn’t sand the top coat before applying the lacquer. It was sort of tricky to tell when it had been applied. I did 3-4 coats for good measure and in an attempt to make it last longer. The painting stage was now complete. 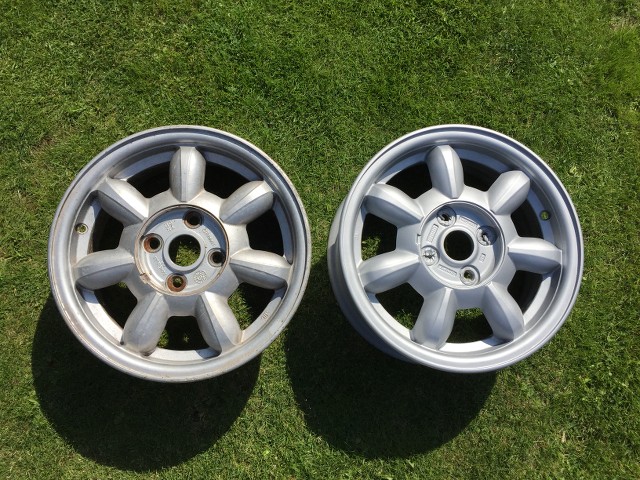 With this stage done, I went back to the tyre shop to fit some Toyo T1R’s in 195/55/R14. This was ever so slightly lower profile than stock, but 10mm wider and gave it a very subtle ‘balloon’ look. This not only slightly improved grip, but helped protect me from curbing the wheels (I have parked badly many times - I think it is literally impossible to curb the wheels in this configuration). I also had to buy some original lug nuts as the ones for the previous wheels were the wrong shape. I then fitted them to the car for the first time! 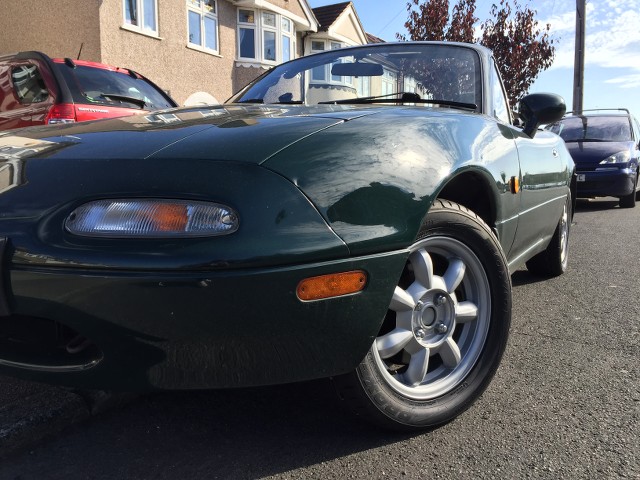 I decided to go against having the full original Mazda centre caps, and instead headed to Ebay to find caps that would fit the very centre of the wheel (leaving it showing the axle looks kind of rubbish)

They needed to be filed down, both the circumference of the fittings, and the thickness of the cap, as it otherwise would conflict with the protuding axle at the rear. These caps just pushed into place - however, for added security I used gorilla tape to secure the tabs to the inside of the wheel. 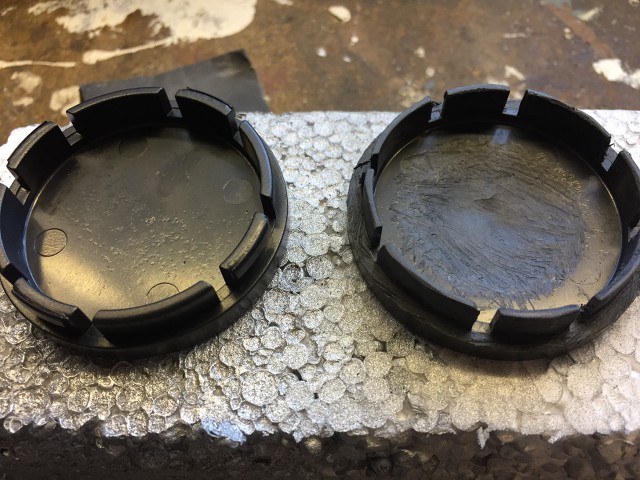 You can see the nibs around the edge are significantly thinner after filing.

I then fitted the wheels to the car again, and this was the end of the refurb. I seem to have lost any close up photos - but rest assured they looked great! 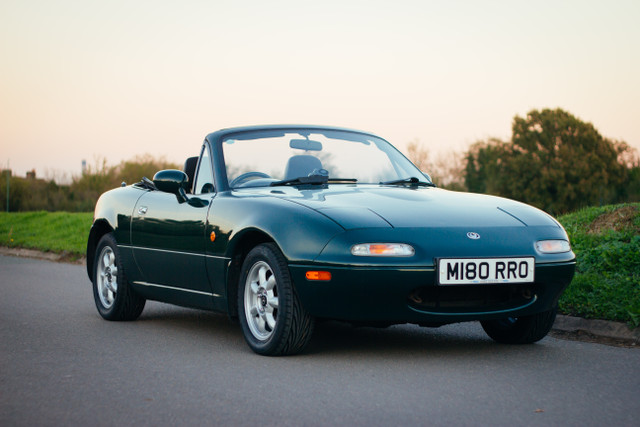 I was afraid at first that at the first sign of a bad winter or a rough road, the paint on these wheels would deteriorate. I was happily very wrong, and it appears the hard work and all that sanding paid off. There are a few tiny chips in the paint, where it has come off in some small places, but generally it has held very well. I did learn that using a scourer on these wheels is a no no - the lacquer comes right off. Another think I have learnt is that, if you’re doing it yourself, the wheel remains rather rough - and the brake dust and dirt that gathers in the very corners of the spokes is a great deal harder to wash off than if this was powder coated or otherwise done professionally. Gradually, over the years I have lost the battle, as I simply did not have the time to do the amount of cleaning required to remove this dirt. Below is a photo of one of the wheels after I removed it for some brake pad replacements recently. 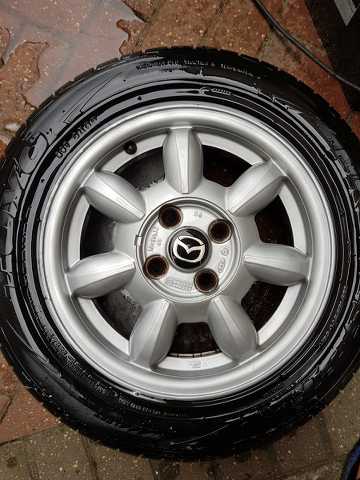 I hope that this guide helps someone somewhere give thier old daisies a little bit of love and bring them back to their former glory.

A lot of this may have been common knowledge, but for me it was all a first, so hopefully someone benefits from this.

Back to Guides: Exterior & Chassis

0 user(s) are reading this topic