Nix. hasn't added any friends yet.

Front Subframe Spacers, What Affect Would They Have?

So long story short I'm mid engine swap at present and to get the engine to sit where I want it I need to drop it about 15-20mm relative to the engine bay. Unfortunately that would mean the oil pan would sit right where the steering rack wants to live.

The way I see it my options are move the steering rack down and forward slightly (probably 10mm forward and about 10-15mm down) but I know that will piss with the steering geometry and seeing as how my car is already lowered quite a lot and suffers from a fair amount of bump steer and whatever else I don't really want to screw with it further if I can avoid it.

The second option is to space the entire front subframe down by 15mm. However posts on some forums about this subject suggest that this would screw with the suspension geometry but I cant see how it would. The front Subframe on the MX5 has the mounts for Steering rack, LCA and UCA so they would all move relative to each other, the only thing that changes is the distance between the top and bottom suspension strut mounts and as I'm on coilovers I can compensate for that by adjusting the height.

So any thoughts on which route is better and why and also why some people seem to think that spacing the subframe down would affect suspension geometry?

So I thought I'd start a Project thread before I started tearing the car apart again for the next project.

Back in February, I bought this Golden Nugget MX5 and had started buying turbo parts before I'd even bought the car because going from a 300HP WRX to a 140hp MX5 just wasn't going to cut it. 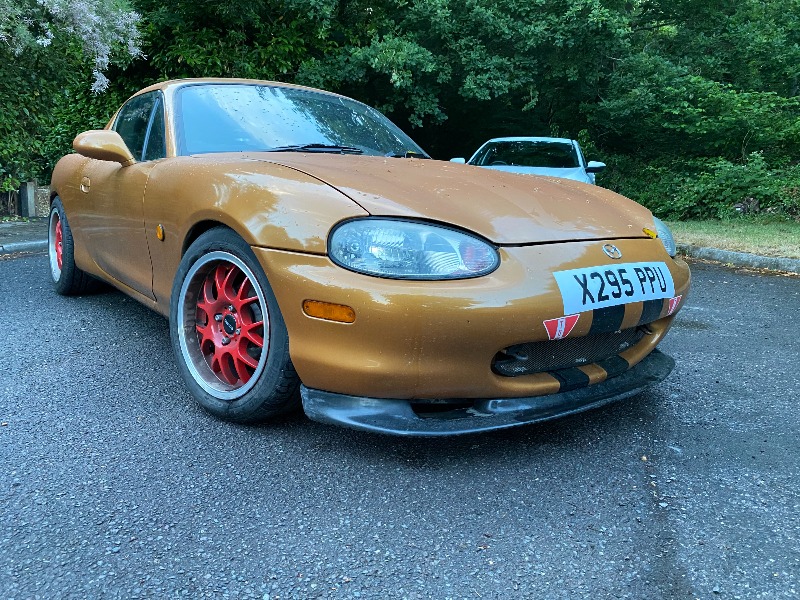 It came with some questionable stickers, coilovers and choice of alloys but it was cheap. It did also come with stripes along the bonnet but I removed those before I took this picture (Still haven't removed the rest). So I jumped on the internet and got to ordering parts but I wanted to do this on a tight budget and do it for less than £2k as I already have another long running project car that is burning money and this was a temporary setup so didn't want to throw too much money at it.

I work as a welder/fabricator so figured I'd make my own manifold, downpipe and exhaust as I've done with most of my cars as without including labour it keeps the cost way down. Now the manifold for this car was a bit of an inside joke between my friend and I where we joked about Subaru swapping my original mx5 (which incidentally someone in the states actually did this). Instead we thought it would be funny to try and get some Subaru farty burble on an I4 so I spent some time in Fusion and designed a manifold that would just about fit in an MX5 but had runners with really unequal lengths and we came up with this piece of madness with exhuast runners 2 & 4 being double the length of runners 1 & 3. 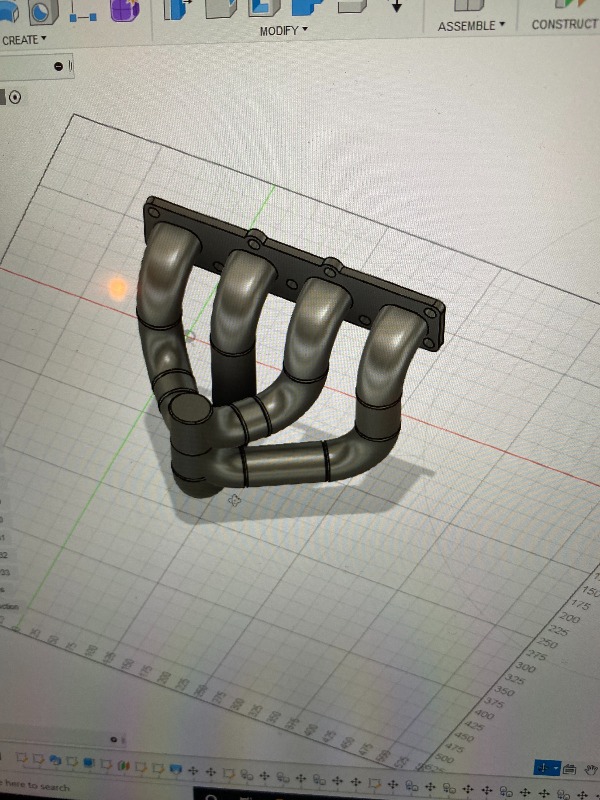 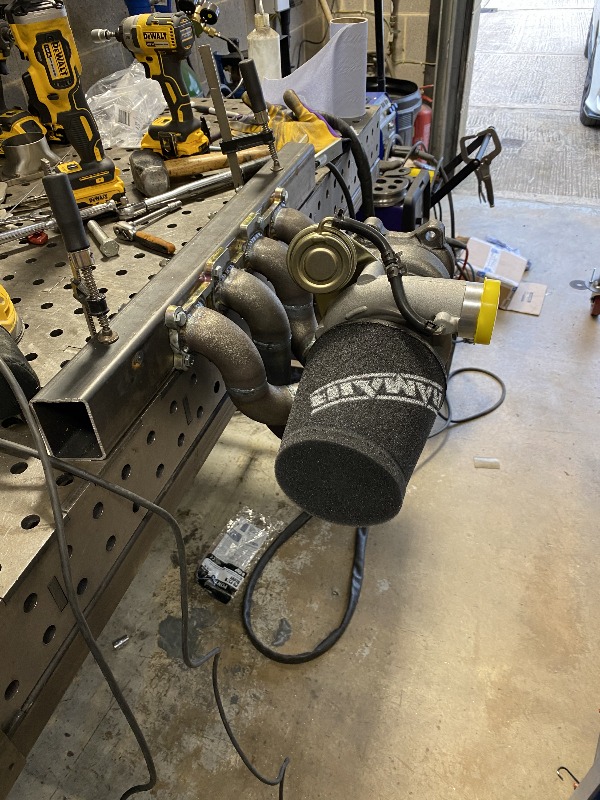 I didn't exactly build this to make insane power as the limits of the BP8 engine internals are well documented and I wasn't in the mode to go through another engine build so any loss/limitations due to the inefficient manifold design is not a problem. Next up was an exhaust and as with my previous mx5 I wanted to do full 3 inch all way from the turbo and as I was on a tight budget that meant no mandrel bends, so enter 3 inch pie cuts lots and lots of them. 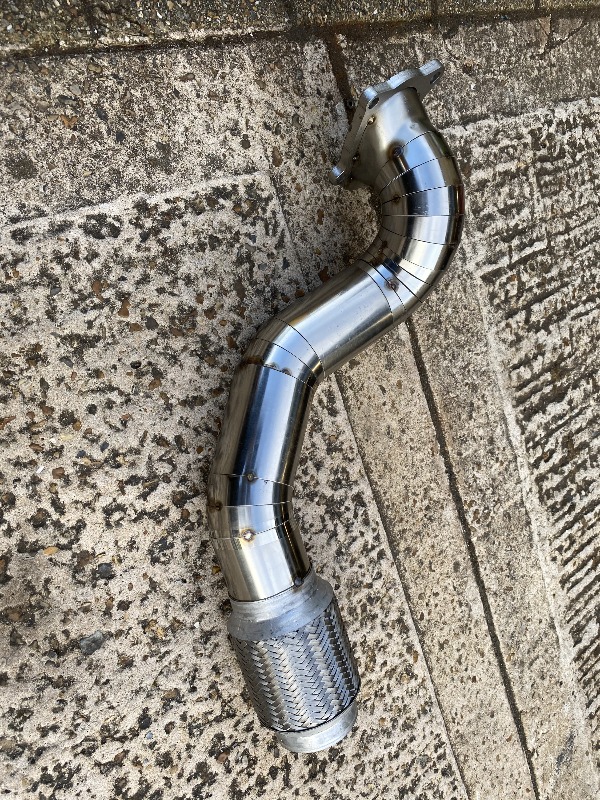 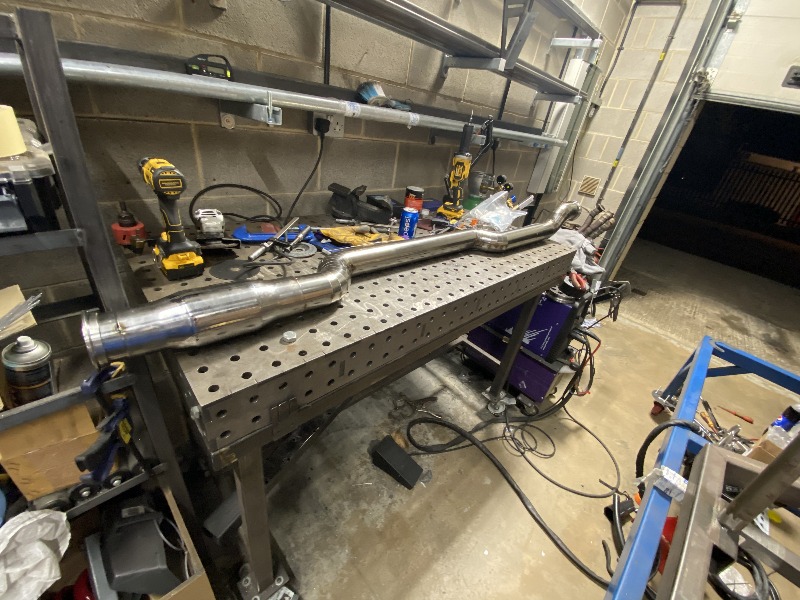 Unfortunately I never actually took pictures of the completed exhaust but It looked awesome, and I even threw in a cat to keep the MOT man happy. After that everything was pretty straight forward, I sourced a "New old stock" ME221 for a bargain price, got some reconditioned RX8 Yellow injectors, Intercooler, piping and fittings for a turbo. Now for the turbo, previously on my last 5 I bought a used Subaru WRX turbo and rebuilt it but I couldn't find any decent stock this time round so opted for the finest ebay China spec turbo (which is about the same price as a genuine TD04 that needs a rebuild).

Next up I threw in a wideband, boost gauge and a few other bits and got the thing running, unfortunately I didn't have access to a dyno (especially as this was in the middle of Lockdown 1.0) so I opted for some street tuning and got the fuel and ignition timing dialled in to where I was happy with it. I started to crank the boost up from 7 pounds and left it at about 12 pounds with a conservative tune. so the turbo install ended up looking like this. Looks a bit messy but it all works and that's all I need for now 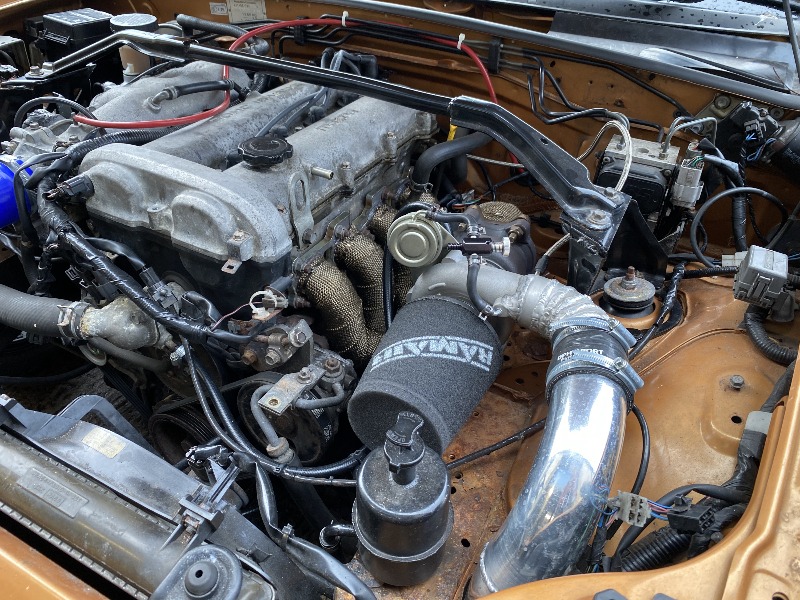 I have skipped some things that I would normally absolutely do on a turbo conversion but as I knew this was only a temporary setup I couldn't justify the money. As such, I'm still running a stock radiator and single fan, stock clutch and no re-circ or dump valve for the turbo. So far its been reliable and not had any issues except coolant temps when drifting, doing burnouts or doing doughnuts.

So all in all the turbo install came to a total of £1734 which I'm quite happy with and this included the following:

And a few other parts required for a turbo install.

After the turbo project I also pulled the ABS out as the sensors are knacked, one snapped off in the hub and both front sensor bolts sheared off in the hubs. Replaced the lot with Full Braided stainless lines and an adjustable rear bias valve. Also painted the wheels black and swapped the shredded budget tires for a set of TOYO TR1's as they are certainly better than the bald tires I pulled off. I also threw together a rollbar from some ROPT510 I had left over from a roll cage we built, so that I could throw in a bucket seat and use harnesses. 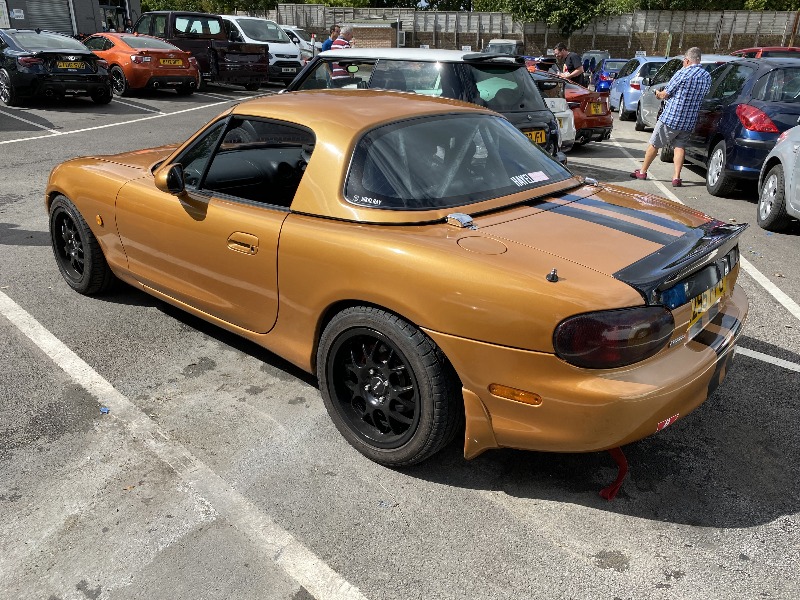 Now if you wondering what the Exhaust sounds like then its a little like this (Ignore the terrible cutting around the exhaust, its since has a tidy bumper cut): https://video.wixsta...0p/mp4/file.mp4

Starting In February the car will be back in the workshop to pull the whole driveline out for a new bigger and better setup (Better might be debatable amongst some), If all goes well the first phase of that should be done by the end of march so stay posted.