Sill Repair - Yes You Can Diy It - Exterior - MX5Nutz Forum

Sill Repair - Yes You Can Diy It

18 replies to this topic

Have finished my sill and arch repairs on my Mk 2.5 and want to encourage others wondering if they can do it themselves.

So, ummed and aghed (sic) as to wether to get stuck in or not. Am buying a late Mk3 or Mk4 in 18 months when the mortgage is paid off and had the choice of, would it get through next MOT with advisory again, bodge it it to pass MOT or proper job? Rose to the challenge and wanted the learning curve so ordered the panels from our favourite shop.

This is the state at the start:

Sized the repair panel on top of existing bodywork to get a maximum outline and drew that on:

First cut into the wing revealed this:

So as you can see my regularly unblocked drain holes did bugger all to prevent this. They don't drain between the wing and the middle strengthener. They don't drain between the middle strengthener and the inner sill. They only drain the cavity inboard of this where the hood compartment rubber drain tubes pass through. Decided that when reattaching new that I wouldn't seam seal the bottom edge to allow it to drain if needed. Already decided to use Dynax S50 cavity wax from Bilt Hamber. Spoke to Michael Bilthamber and his oppo in the lab Pete who were both very helpful. After emailing pics this was their recomendation.

How I didn't cause futher damage to the inner wing whose condition was as yet unknown I ground off the corner edge on the outside of the panel and snapped the old wing off but not the arch, if that makes sense. Then tin snipped the old arch off between the original spot welds and then dressed down.

The 4 holes above the cut were for self tappers to hold the new panel flat against and steady. Used a die grinder to cut through both old and new panels together to get an accurate joint.

Fitted a "joggler" to give me something behind to weld to rather than possibly blowing holes through two 20 gauge edges of a butt joint.:

Drilled holes above and clamped a 2" strip of repair panel at each "spot weld" with mole grips after dressing the back of each hole to hold the joggler flat for spot welding with MIG welder. Gently used water pump pliers to ease the joggler back into the cavity to prevent it from making the join proud.

In the door jamb after first cut to remove old section was left with this:

You can see where I have drilled out just the top of the spot welds. Above the spot welds used the die grinder to cut out the section of old wing to make way for that edge of the repair panel to sit in. Outline can be seen on 3rd pic, in the door jamb/reveal. Just continue the felt marker line down from the airbag sticker.

Panel in spot welded in:

and dressed off with flapper wheel:

Did do both sides! This side which had appeared to be in better nick wasn't as it was full of bodge. Needed a little plating with a strenghtener:

Then the dust settled:

Cavity wax leaking back out, also went in from the boot inside each wing behind the join:

Back home, back together, MOT passed and after flatting off, cutting compound, clay bar on the old paintwork, polish and wax she looks this:

And drop garage door, go on cruise up the Fjords and round the Med

I'd never tackled bodywork as deep as this. Took a lot longer than I thought it would, proceeded very carefully though I suppose. Pleased I didn't bodge it or wing it through next test. Can now either turn it into a track slag when I buy the new one or sell on knowing it's had a professional repair and is structurally sound.

Thanks for looking, hope it's inspired some people.

Looks like you did a cracking job...all the effort looks to have paid off👍

Looks like a good job, easy enough to do if you have the equipment and some welding experience.

More people should have a crack at it, the sense of achievement when finished is great. I even managed to blend the paint in on mine. Got the nearside rear quarter to do in the winter where someone hasn't done such a good job.

Certainly right about the sense of achievement red.

Thanks for the positive comments guys.

Good stuff mate, looks like a top job. I'm interested in doing it on mine, but have no welding experience. Might try and find someone local who does MIG and pay them a bit of beer money to teach me the ropes before I attempt it myself.

Lucky to have welder at work.

Took a while to get it "running" right. Turned out the shroud around the wire feed was loose so not getting the shrouding effect of the gas protecting the weld.

Once sorted you could hit the trigger to start the melt and have the confidence to hold the trigger to fill the melt/weld and got some lovely spots, left one of them not ground off I was that pleased.

Excellent, something I've never tried (welding)  except back in my college days on steel pipes, not very good then. 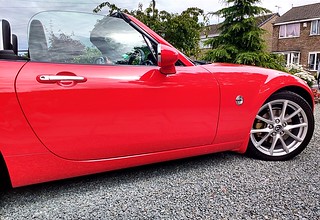 All about the prep and as Quad says, get the welder running right. Also don't weld for too long in one place or the panel will get warped.

Added this to my favourites. I am slowly coming around to the idea of having a go at this myself and will keep this for extra encouragement! Out of interest. How long did it take to complete start to finish?

It's difficult to put a time on it as you won't know how bad things are underneath until you cut the quarter panel off. It's the repairs underneath that take the time, as you will have to make repair panels. Then there's rust proofing before putting the outer panel on.

You have to take your time welding the rear quarter on, too much heat and you will warp the panel badly. Filling and shaping the panel will take ages to get right, then doing a half decent paint job will be a couple of days.

I would do it over a week, do rush or it won't turn out well.

Took me 9 days start to finish buddy! Longer than I expected but was proceeding very cautiously, particularly on the first side. Now I see why AK quoted me 750. Per side!

anyway to get the pics back up in this thread?  sorry for bumping an old post.

PM me your mobile number and I'll WhatsApp them to you, that pesky day job means using another image hosting site will quickly go to the bottom of the to do list.

Sorry to resurrect an old thread but do you still have the pictures handy?

Hi mate, nee bother, pm me your number and I'll WhatsApp then to you.

I got 350 heads on a 305 engine, she does ten mile to the gallon, I ain't got no good intention
Back to Exterior