Is The Standard 1.8 Crossover Tube Restrictive?


10 replies to this topic

I've been looking at the standard mk1 1.8 crossover tube and where it attaches to the throttle body the design looks very restrictive with various indents etc. to clear things. Has anyone seen proof that this actually is a restriction?

Apparently the standard one helps with torque but is slightly restrictive to top end power - https://supermiata.c...ata-intake.aspx

Apparently the standard one helps with torque but is slightly restrictive to top end power - https://supermiata.c...ata-intake.aspx

Interesting article thanks, but unfortunately it references the NB, not the NA tube I've got.  But it does have some good info

This is the area that looks like it restricts the airflow, this big dent on the bottom of the pipe just where it goes into the throttle body. Anyone else thought this is strange? 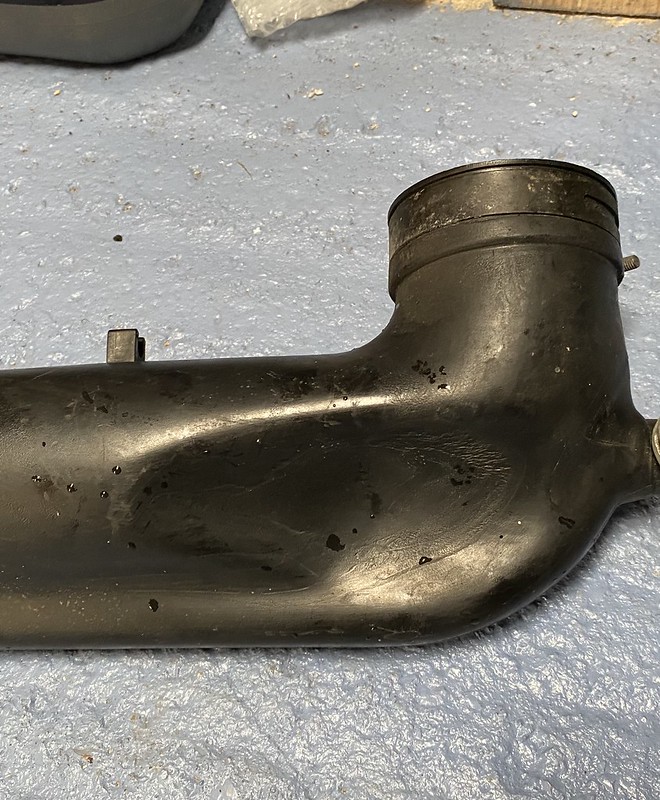 You can use a magnehelic gauge or cheap digital pressure gauge to measure the pressure drop over that section. My guess is that its negligible compared to other losses in the system.

This is the area that looks like it restricts the airflow, this big dent on the bottom of the pipe just where it goes into the throttle body. Anyone else thought this is strange?

I'm still running the tube too, never noticed that though!

I think the article I referenced above relates to any BP/1.8 engine but I think the later intake pipes are round rather than squashed like above so maybe they're an improvement too (despite still having the resonance chamber)?

I keep thinking about making an intake just with a couple of 2.5" silicone bends and straight pipe, easy and cheaper than the likes of a K&N typhoon. For what I do a little more top end power is worth losing a little torque and having seen that stock intake pipe it must be a little restrictive.

I still have the crossover pipe from the RS doner for my engine conversion, a bit of research and it looks like engines with VICS didn't have the resonance chamber in the crossover (apparently the VICS did the job of covering the 'dip') I'm going to see if I can adapt it to fit a mk1 as the tubing is a lot bigger bore than the one above.

That's interesting, i assumed they all had that chamber. I'm sure it can be made to fit easily.

Let us know if it makes any difference.

I will report back

at the moment the car is off the road as the steering rack has been sent away for rebuild.  It's just struck me that when I had the car setup on the rolling road it had the K&N typhoon which was very unrestrictive at the time.

Back when I was prepping for STS2 class...I tested 7 intakes. 2 were stock and modded stock. The others were the kings of that era. Best was modded stock. The resonator (97 1.8) helped in the midrange. And the mods were at the intake accordion to fit a cone to MAF and drink air behind the nearby headlight. And at that flat spot...I cut that out and fiberglassed in a round cross section and accomodations for the turn coming up into the TB. It was the clear winner, mostly due to the midrange gain. Testing was done scientifically with weather corrections, same level road averaged in both directions, high end datalogger and so forth.

I was just reading that a hour ago. Lol
I can't really understand what the guy is saying. A picture would have been very useful.

Back to Mechanical & Electrical