11 replies to this topic

I recently installed a set of double precious metal tip plugs in my ‘91 Miata, which pretty much flies in the face of convention stateside where the, “if it isn’t broken don’t mess with it” line of reasoning prevails amongst the Miata population.  The whole sordid story can be read here, along with controversy about the use of anti seize on spark plugs for added entertainment:

What I’m curious about is whether these are points folks east of NYC debate about, or is this a US thing? 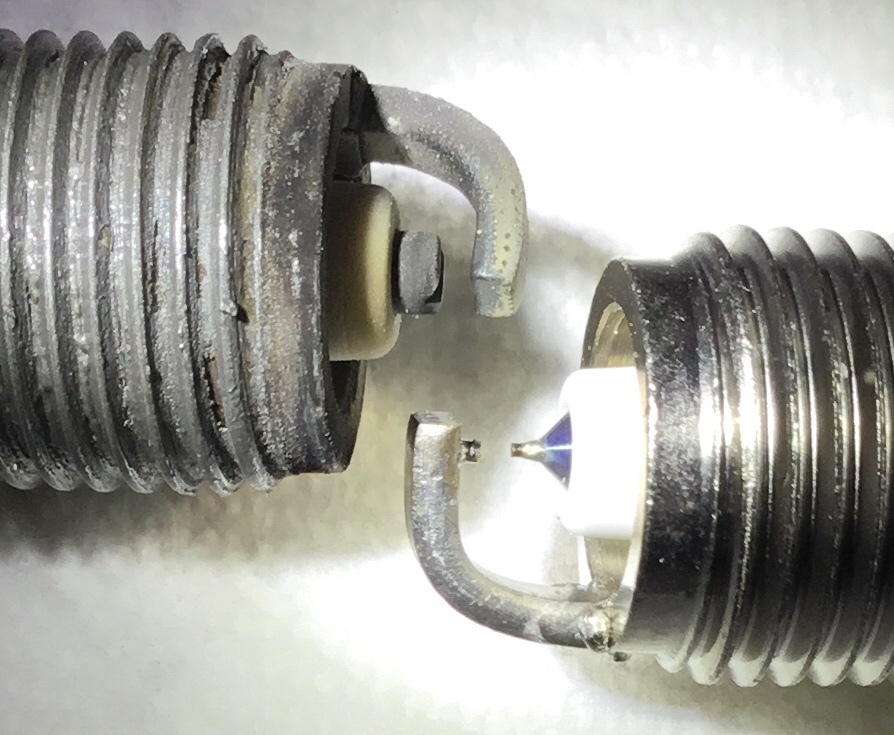 Out with the old, in with the new!

on a roadcar I've always stayed with oem spec replacements (although modern plug tech hascome on loads in the last few years so...)

years ago the 'needlepoint' electrodes were mostly for high-compression engines but now.....

I don't know how that discussion became such a confused mess. I use NGK long reach plugs. I have had my car on the Dyno and they improve torque at lower RPMS. The long reach plugs outperformed a set of brand new standard NGK plugs when tested back to back. I don't think I'd change without evidence another plug was better.

Sent from my motorola one using Tapatalk

on a roadcar I've always stayed with oem spec replacements (although modern plug tech hascome on loads in the last few years so...)

years ago the 'needlepoint' electrodes were mostly for high-compression engines but now.....

There have been much worse threads at Miata.net over deviating from the factory approved plugs, and practically wars fought over the use of anti-seize, so all in all I’m pleased that the thread I opened has remained pretty civil.  The usual objections to precious metal tip plugs is their cost and the ease with which plugs are swapped in a Miata.  These were barely mentioned, so maybe we’re coming around to seeing the potential advantages of the improved metallurgy narrow tip plugs.  I’ll likely install a set of ruthenium tipped plugs in a couple of weeks and I’ll post the results.

I don't know how that discussion became such a confused mess. I use NGK long reach plugs. I have had my car on the Dyno and they improve torque at lower RPMS. The long reach plugs outperformed a set of brand new standard NGK plugs when tested back to back. I don't think I'd change without evidence another plug was better.

Sent from my motorola one using Tapatalk

Like I responded to Rich, there have been much worse responses to these topics in the past.  Much MUCH worse.  Consider post #28 for reasons you might think about changing to PMPs.

And the result?  have you noticed any difference driving the car with the new plugs

I guess some folks love to tinker and experiment with different technologies in the cars. Nothing wrong with that. For me, I'd rather be out driving for enjoyment than fussing over which oil, tyres etc. The stock plugs work for me so that's all I need when service time comes (1992 NACE).
Now, there's an R53 Mini on the driveway too and that is plug sensitive. It can idle and run like crap if the proper spark plugs aren't installed. Thankfully, they last a while before replacements are required.(Iridium plugs ~ £48 for four).
I have never used anti-seize for spark plug installation but I have seen/heard it debated in the past.

Interesting thread.  I've always just used NGK BKR plugs and changed them rather than inspect and refit because they're cheap, but this is making me seriously consider trying those iridium TT plugs.

It also reminds me that I hardly read miata.net these days and just use it as a search reference.  Time was I used to go there and just click "New Posts" and read everything.  But that was back when there was hardly anyone posting about those new-fangled NBs.

Hmm.  I see Opie stock Denso IK20TT plugs but they're £12.95 each; about the cost of a set of four ordinary plugs.  I mean, I wouldn't quibble as they're supposed to last for absolutely ages, except that Jim A paid $6.34 which works out under £25 for a set rather than over £50.  Might shop around a bit.

And the result?  have you noticed any difference driving the car with the new plugs

I notice my wallet is a bit lighter.

All kidding aside, I stay on top of the tune with all of my cars, and so they all always run very well.  The new plugs feel to me much like the low mileage conventional nickel alloy plugs I took out.  So as far as power, torque, and fuel mileage is concerned, I’m not sensitive enough to tell a difference, but the engine does start and run perfectly.

To expand a bit by copying something I noted in the Miata.net thread:

In the period between the newly installed plug, and the time when that plug becomes ripe for replacement, there is a mostly unnoticed but definitely real deterioration in the performance of that plug. We might not notice any changes, but perhaps the coils and plug wires do, as higher loads are imposed on them to move the spark between electrodes. We know this is happening because if left unchanged long enough a plug will begin to fire erratically, or not at all, and coils and wires frequently suffer collateral damage as well.

This inescapable deterioration over time is where precious metal plugs earn their keep. Nickel alloy plugs show noticeable deterioration in the form of tip erosion almost immediately, and one could expect performance to degrade, however imperceptibly, just as immediately. That tip erosion will continue unabated until we, 20k or 30k miles later, change them for new plugs. Precious metal tip plugs should, in contrast, function indistinguishably from new until they are replaced, which is usually for reasons unrelated to electrode tip deterioration.

So instead of the a saw-tooth installation-deterioration slope-replacement pattern of performance one would expect of a nickel alloy plug, the performance pattern of a precious metal tip plug could be expected to be essentially flat, and as new, for the installed life of the plug. It’s in the latter stages in the life of a nickel alloy plug where I would expect the performance of the equivalent precious metal plug to show measurable improvement in performance and reduced loads on other ignition component parts.

I received the PSPE type NGK ruthenium plugs I’m going to install in my 1.8 1995 Mk1 today.  Here’s a closeup of the business end: 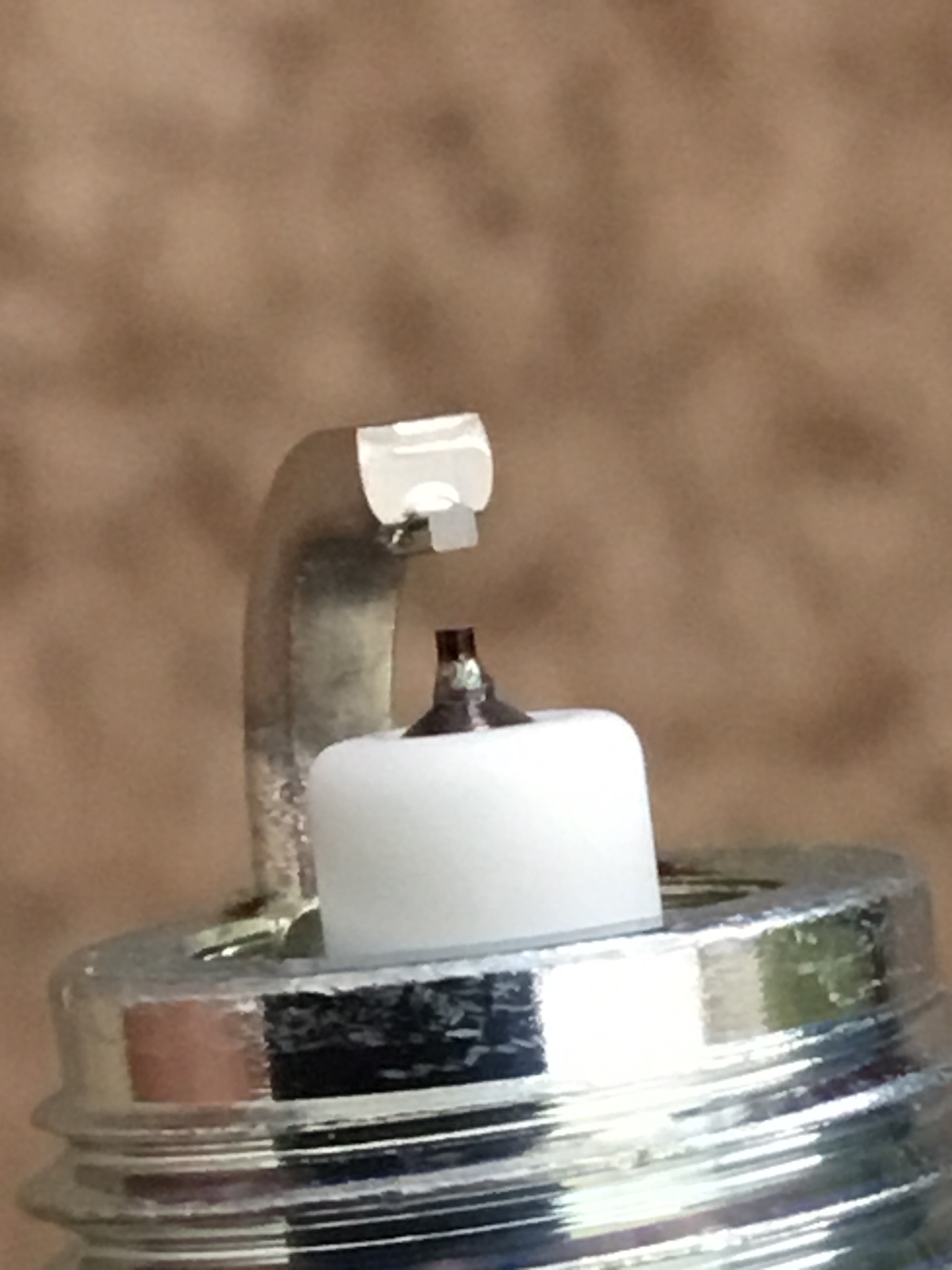 And the same plug from a slightly different angle, 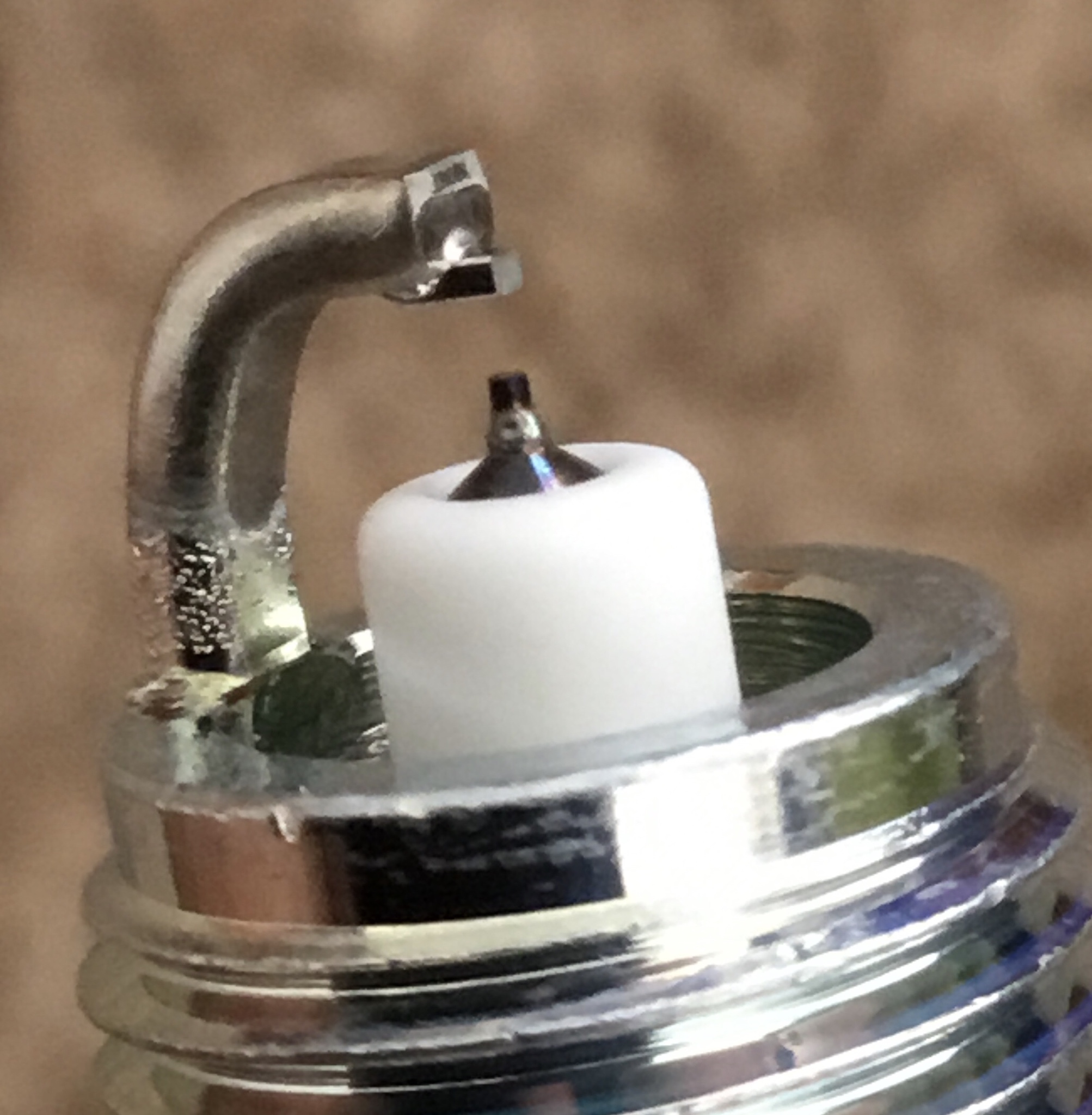